The Art Institute at Chicago had a number of Van Goghs. 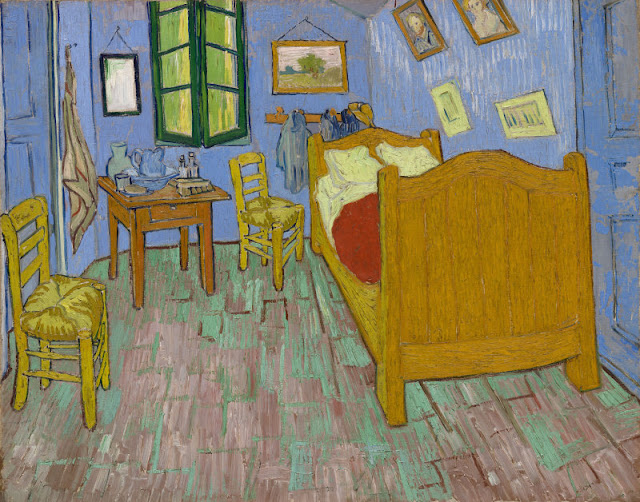 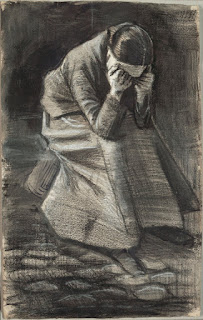 This Van Gogh reminds me of an earlier blog about madness.

In The Cockroach Catcher is a Chapter called “The Peril of Diagnosis”, in which I highlighted three cases where a definitive psychiatric diagnosis was in the end more a hindrance than an aid, as that focused all attention on the cure of the symptoms and little else on the resolution of the underlying psychiatric problems.........In one of the letters from my contacts at the clinic, I was told that Jane had to be admitted to a hospital in London. Her weight was so low that she was on tube feeding.
News of a famous heiress just flashed through this morning’s news and the psychodynamics of Jane’s Anorexia Nervosa suddenly became clearer. The heiress witnessed her uncle’s murder and was anorectic ever since. Jane was home when her father died in mother’s arms with a massive haemoptysis (coughing up of blood, a rare but not unknown effect of lung cancer, generally a massive bleed). It must have been very traumatic.How dim of me. That was bereavement, a slow suicide by someone who felt less worthy to survive........I recently visited the Wellcome Collection for their Madness and Modernity exhibition: about mental illness and the visual arts in Vienna 1900.
It was an interesting experience looking back at “treatment modalities” of mental disturbance in one of the most cultured city in Europe at the start of the 20th Century. There was an ancient Chinese saying: 50 steps laughing at 100 steps – a reference to a deserter who ran 50 steps from a battle field laughing at someone who ran 100 steps. Are any of our present day methods any better than what the Viennese dreamed up over a century ago? At least the mental patients (yes, still patients) then had somewhere specially designed and safe to practise their art and be contained. Will the next generation of psychiatrists laugh at what we are currently practising?

Bobby Baker is a successful performance artist who had suffered acute psychiatric problems including self harming, which she captured over a period of 10 years in hundreds of 'diary drawings'. These paintings (158 drawings, selected from a total of 711) and commentaries demonstrated her anger with the mental health service and any viewer thinking of entering psychiatry might be put off forever.

Bobby was told by the first psychiatrist she saw that she suffered from borderline personality disorder. (Time article link)
As her story unfolded in her drawings, one gets an uncomfortable feeling about the state of our psychiatric service and wonders if we are even at the 50th step. She has triumphed over some of life’s most frightening experiences despite all. 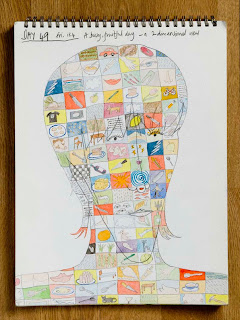 Let us look at Van Gogh's self portrait: 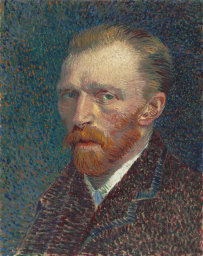 “I don't know how but I must ask about her father next - the classic therapist's question is, in her case, inescapable. Again, a picture speaks first. In Telling Keith, she is weeping, her tears bizarrely swirling upwards. Her mouth is open and a sea floods out - in the middle is a tiny, drowning figure. ‘That's my father,’ Baker says. ‘I know,’ I say. I know because, in her autobiographical show Box Story she told audiences about a summer holiday in Brancaster, Norfolk when she was 15 and had just received her surprisingly good O-level results. Telling her father her news was 'the best moment in my life' and he gave her the happiest of hugs. She asked whether he was coming to lunch? Not straight away, he replied. He would have a dip first. A bit later, they heard a woman's voice shouting, ‘Help! Help! Help! A man's been washed out to sea.’ Her mother leapt to her feet shouting, ‘My husband! My husband!’”Kate Kellaway Observer, Sunday 28 June, 2009.

I wrote in my book:
“……But Miss Horowitz you cannot fault. Her father was a famous child psychiatrist and she was really an Anna Freudian. Not so much of the penis envy or bad breast good breast stuff that Gail kept talking about……”
Miss Horowitz was my psychotherapy supervisor. We spent an hour and a half every week talking about my patients. It was years later when I realised the essence of her approach and therefore that of Anna Freud’s is the naturalness.
Much has been written about Sigmund Freud as a person with what looked like unresolved personal problems. He had without doubt influenced our thinking for at least thirty years as the Nobel Laureate Kandel conceded. He provided a framework for our further understanding of the working of the human psyche. Much as physical medicine is being continually updated by newer findings based on new scientific discoveries, later psychiatrists have been able to modify and improve upon Freud’s original ideas. I always view with suspicion the rigid adherence to classical ways in matters of the mind.
At the time when I was working at the Tavistock, Anna Freud (December 3, 1895 - October 9, 1982, sixth and last child of Sigmund and Martha Freud) continued to give seminars on Wednesdays at lunch time at her home opposite the Hampstead Clinic. This is now the Freud Museum. Anna Freud herself would already have been seated even if you made special effort to arrive early in order to have a seat. She would invariably be knitting and the few times I was there she seemed to be knitting this enormous scarf or even blanket. It spread over her knees and the floor in front of her as if to say “This is my space.”
Arthur Couch, who had 6 ½ years of psychoanalysis with Anna Freud, wrote a paper to try to give a picture of Anna Freud's views about adult psychoanalytic technique. The following excerpts gave particular insight:
“……She seemed not to know the orthodox 'Freudian' rules of technique about such restrictions. At times she even expressed her own opinions on certain realistic issues I was talking about. I recall telling her I was surprised that she should say such things; she answered : ‘Why are you surprised?’ …… I came to realize that I had previously assumed something too rigidly limited about Freudian clinical principles…….”

“……As I recounted these various failed attempts each day, Anna Freud seemed to increase the intensity of her knitting, which she did most of the time so silently that I hardly noticed it. Finally, in one session, she began to speak about the issue of my soft-spoken patient. I expected her to give a very important interpretation about my difficult situation. But what Anna Freud simply said was: ‘Tell her to speak up.’ This I did, and it solved that particular problem for the rest of a long analysis……”

“………Erikson's wife was pregnant, and he was spending many sessions talking about his worries about her pregnancy and what having a baby meant to him. Being very involved with this topic and wanting his analyst's full attention and concern, Erikson expressed his irritation to her that she was not speaking about it, but Anna Freud just kept knitting with increasing intensity while remaining silent……. when Erikson came into his session and announced that his new baby son had been born, Anna Freud gave him a blanket she had been knitting all along for his baby……”

Anna Freud once said: “The trouble with common sense is that it is so uncommon.”


Slide Show: Guardian.
Related:
Can They Draw: From Picasso to Matisse
Picasso, Medicine and Lloyds
Picasso and Tradition
“Wake-up Call” to British Psychiatry

Bipolar and ADHD: Boys and Breasts
Antipsychotics: Really?
Posted by Am Ang Zhang at 4:26 PM