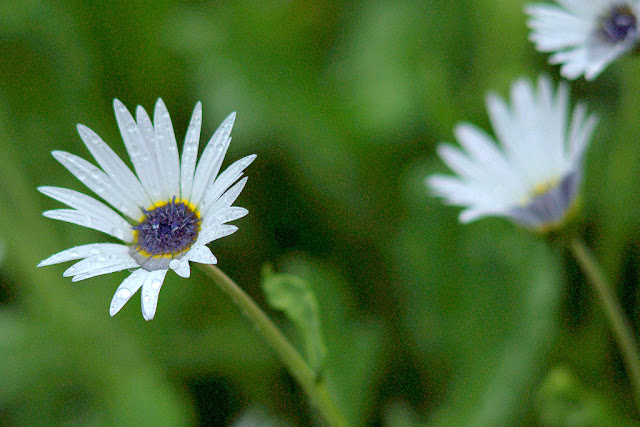 To me the meanest flower that blows can give
Thoughts that do often lie too deep for tears.

Ode: Intimations Of Immortality From Recollections Of Early Childhood.

One day a referral came of a boy called Anthony Wordsworth.  He had just turned three.
“You will like Mrs Wordsworth.”  No reason was given. “Mr Wordsworth will probably not come to see you as he has a very important job in the City.  Anthony is such a handsome boy, a bit quiet, and I think you will like him too.”

The Wordsworths lived in one of these big houses and Mrs Wordsworth looked very young for a mother with two children, the older one being nine. I marvelled some years later how with all the hard work her two children put her through she still managed to look that young. The wonders of modern make-up together with smart dresses might have deceived me.

Anthony was truly autistic. At that time one of my juniors had just returned to work with me after having her twins.  She sat through the first session.
She said to me afterwards, “I thought they did not make Kanner’s classics anymore.” Anthony was a Kanner’s Classic. Leo Kanner first described the classical autistic child in 1943 and there had not been a better description since. Not many children have all the classical symptoms, but one finds the diagnosis of Autistic Spectrum Disorder (ASD) more and more common place[1].
I said, “Yes, even down to the good looks.”

I often wondered if our creator really has such a sense of humour or is everything just chance.

One could not but feel sorry for the mother.  Later I found out that she came knowing that autism would be my diagnosis, and if I had come to anything different, I probably would have never seen her or Anthony again.
She knew of the diagnosis from very tragic personal experience. Her own brother was diagnosed such in by our very eminent Professor who was the world’s authority on autism.
In other words, she had lived, breathed and dreamed autism all her life and now her worst nightmare was realised. Her own child had turned out to be autistic like her own brother.

Perhaps her years of looking after her brother had prepared her for this day. Perhaps our creator made sure that for those who were going to have difficult children, they were made tough enough.

Anthony’s older brother was smart and clever. She felt good then that perhaps genetics was not at play, and her worst fear was unfounded.

I was once consulted by a grandmother on a very tragic situation. She had two daughters. One was severely autistic, and the other was very intelligent and a high achiever. The latter became an academic, married and received the best genetic counselling from the same university where she was a professor. Minimal chance, she was told. She went ahead and the first child was subsequently diagnosed as suffering from Retts Syndrome[2].  She was not really seeking any second opinion but wanted to know if Retts and Autism were the same.  This case reminded me of the old Yiddish saying “Men tracht un Got lacht” – If you want to make God laugh, tell him your plans.

Anthony’s mother went on to tell me she was going to take matters into her own hands because she would not want her son to deteriorate like her own brother, who was thirty five then and living in an institution.

“Mrs Wordsworth, I belong to that small group of doctors who believe that the brain is really capable of a good deal more. But we have to give it the right input.”

This principle has been applied to the treatment of autism over the last fifteen years and the results are really quite exciting. We do not pretend to know the cause or causes of autism but I have been with some great pioneer workers and I believe that the old thinking that things cannot change is not entirely true.

She started crying and Anthony came towards her.

Even with the best breeding there was only so much one could hold back.
It was a moving sight, more because Anthony moved towards mum. What a positive sign.

“I would like to arrange for Anthony to see the same Professor that saw your brother. This is not because I do not trust my own diagnosis, but I think it may be what you would like but dare not request. It would be good for our future work together if you do go and see him.

“Before the appointment which could be a while, there is something you can start if you are not doing already. Do not stop talking to Anthony. Give him running commentaries on what you are doing even if it is about tidying the place, getting his dinner or doing his laundry.”

“Don’t wait for his response,” I emphasized.

Many new parents tend to parent by responding to cues given to them. There is nothing wrong with that. We talk to our kids when they talk to us and we leave them alone if they want to play on their own. Sometimes parents insist that quiet play is actually good for their children when they themselves want some peace and quiet.

With autistic children one may have to wait a very long time for those cues and they may never come.

“To be honest, I have been doing quite a bit of that, but I was not sure if it was right or wrong and I never dare tell anyone, not even my husband.”

It is always that much better to suggest something that a parent is already doing. First you are no longer instructing her and second you are more likely to succeed. She had been using her instinct and using it well.
She cried even more and told my secretary later that she was more moved because I seemed to know what she wanted and I saved her the embarrassment of having to ask me herself. She was planning to pluck up courage to ask me for a referral to the Professor towards the end of the session. It was not so much that she doubted my diagnosis but that she thought the Professor needed to know that there were now two cases in her family.

Mrs Wordsworth did get her appointment pretty quickly. No surprises. The diagnosis was confirmed. The Professor thought some of my suggestions seemed interesting enough and Anthony would be best served attending the clinic locally. He was grateful for the update on her brother’s family history. He thought that Anthony’s major long term handicap would probably be his speech.

With the Professor’s blessing, we could now start.

We were aiming for very small changes but the feed would come from the parents and I wanted to get her husband involved if possible.
“I told him everything after our first meeting. It’s a good job you referred us to . I think he will be upset for a while but he will come round.”

Denial is a useful if ineffectual defence, but now we needed to get results.

It was time to have something for show.
“Do you think Anthony will have a speech impediment or handicap in that area?”
“You’ve heard the Professor but we are not going to stop doing things just because problem was predicted. The best doctors do not mind being proved wrong now and again.”
Mother produced a video tape.  A recording of a 90-minute period of her at home with Anthony.
“At this rate he will speak before three and a half, don’t you think?” I joked.
“Like my brother you mean.”  She has already told me that her brother had a serious speech problem.
At three years and four months Anthony spoke. He did not just speak. He was in full sentences.
I said to mother, you have delivered.

Father came to see me the following session. I listened and picked out as many positive aspects as I could and encouraged him to just get on the floor and play with him. It was easy for me as I was already on the floor helping Anthony sort out a complex rail system that we had just acquired.

In our work, you sometimes just have to have fun.

One little boy once observed, “Do you live here, Dr Zhang? It must be fun, with so many toys to play with.”

We worked on entrenchment and we worked on expectation. We also ventured into something newer – putting challenges and obstacles through play into Anthony’s life.

Then we tried something even more daring – introducing imagination.

From the book, The Cockroach Catcher.

“In 1943 Leo Kanner published a paper that would, with Asperger’s work a year later, form the basis of present day understanding of Autistic Spectrum Disorder. He considered five features to be diagnostic. These were: a profound lack of affective contact with other people; an anxiously obsessive desire for the preservation of sameness in the child's routines and environment; a fascination for objects, which are handled with skill in fine motor movements; mutism or a kind of language that does not seem intended for inter-personal communication; good cognitive potential shown in feats of memory or skills on performance tests, especially the Séguin form board . He also emphasized onset from birth or before 30 months.” From the book, The Cockroach Catcher.
Autism: Frances Tustin & Entrenchment!