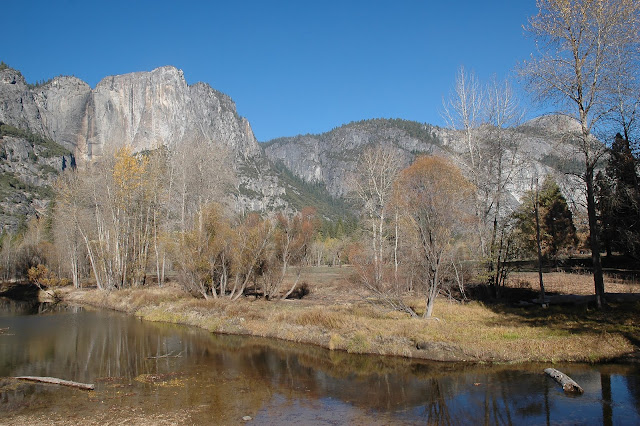 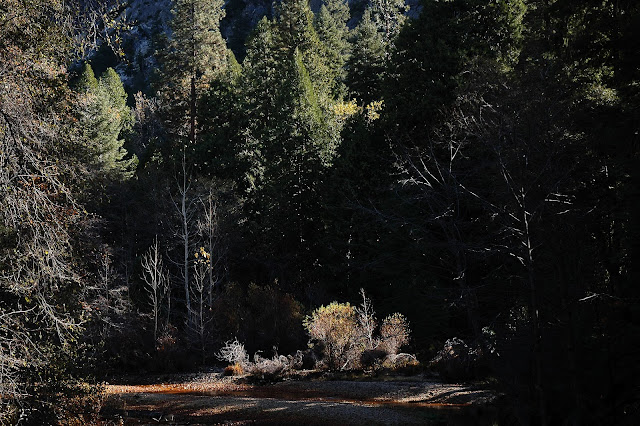 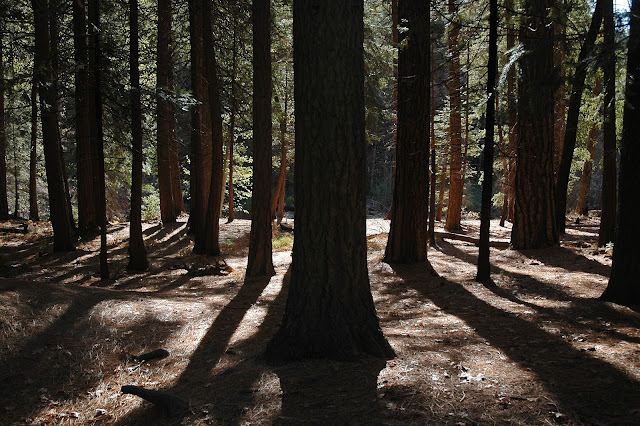 offers great photo opportunities. This is in part due to the integrated National Park system that has allowed easy & universal access from the days of Ansel Adams to the present.

From the home of Capitalism it is perhaps very telling that it would legislate against any commercial exploitation of one of their country’s most important assets: natural beauty.

Over the course of more than 150 years, a once-radical idea has evolved into a cohesive national parks system, with a sometimes conflicting two part-mission: to make the parks accessible to all and to preserve them for future generations.

Is there anything else we could learn?


Ideas without precedent are generally looked upon with disfavor
and men are shocked if their conceptions of an orderly world are challenged.
Bretz, J Harlen 1928.

At the start of the new school term after the summer of 1960, we had a new geography teacher. Now if the truth be told, up until that time Geography was not up on the list of subjects even the diligent students found exciting. Geography often competed with Civics for the bottom honour of the least favoured subject.

Not any longer. We now had a bright young teacher straight from the University of Hong Kong; and from the first lesson we were spell bound. Yes, she was elegant and stylish, but I really did not think those were the only reasons for our newly discovered enthusiasm. She was able to capture our attention and made what we thought were boring subjects riveting. For the first time what happened millions of years ago fascinated us. Glaciers became hot.

Looking back now, I realise our understanding of Planet Earth was then in its infancy. Harry Hess of Princeton University was just formulating the Sea-Floor Spreading theory that is now generally accepted in the geological community.

We were so inspired that the Meteorology Club membership increased dramatically. A guided visit to the Royal Observatory (Hong Kong) further cemented our new found interest.

On my recent vacation in Washington State, I was reminded of our inspiring geography teacher. No, not many of us became geologists or meteorologists; but our interest in such matters stayed with us.

In Washington State we saw a geological puzzle that took over 40 years to solve: the Dry Falls. 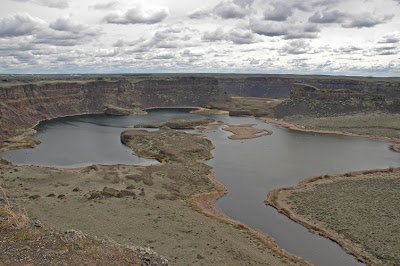 The Dry Falls in northeast Washington was once the world’s largest waterfall, with water plunging 400 feet over a 3.5-mile-wide cataract. To put it into perspective, Victoria Falls, arguably the biggest and grandest fall in the world is only slightly over a mile wide and has a drop of 360 feet. Iguazu Falls is wider at 1.67 miles although nearly half a mile of it is now dry. Its drop ranges from 210 to 269 feet. Victoria Falls has therefore the largest curtain of water. Niagara, is small by comparison: ¾ mile wide and a drop of only 167 feet. However, it is the most easily accessible of the three falls.

The Dry Falls was the result of a series of events and catastrophes starting from 17 million years ago. For 6 million years, enormous lava flow after lava flow engulfed the area. This was followed by a warping of the plateau and an uplift of the mountainous region in the north. Then the Ice Age began about 1 million years ago, resulting in the formation of glaciers, subsequent flooding and formation of huge waterfalls. When the ice eventually receded, the network of rivers and streams in the plateau were left high and dry several hundred feet above the Columbia River. Today Dry Falls overlooks a desert oasis filled with lakes and abundant wildlife.

(Those interested in the full details can read the transcript of Mysteries of the Megaflood.)

The theory of the colossal flood was first proposed by geologist J. Harlen Bretz of the University of Chicago. In the summer of 1922, he became intrigued by the maze of huge streamless canyons, dry falls and other strange geological features in this area. As the area had few roads, he had to cover much of the 3000 square miles by foot. He worked painstakingly for the next seven summers, documenting what he saw, and came up with his hypothesis: a catastrophic flood greater than geologists had ever recognized on earth. It was a bold challenge to the prevailing principle of "uniformitarianism," which held that geological changes occur slowly, through steady processes. To other geologists, the idea of a sudden, colossal flood was unthinkable heresy. They emphatically declared his theory ‘wholly inadequate,’ ‘preposterous,’ and ‘incompetent.’ Though warned, Bretz proceeded to publish his conclusions.

In 1965, the International Geological Congress toured the Channeled Scablands (name invented by Bretz) and finally sent Bretz a telegram stating, ‘We are now all catastrophists.’

In 1979, the 96 year old Bretz was awarded the Penrose Medal of the Geological Society of America, that nation’s highest geologic honour.


Why has the might of McKinsey not been able to privatise some of the US National Parks? Should there not be Time Shares in these most beautiful of places?

Could our National Health Service be like the US National Park?
Providing world class medical care to all and preserving it for future generations!

has Yosemite and it is also the home of Kaiser Permanente.

The Earl Howe amendment to the Health & Social Care Bill was announced, with perfect timing, just before the Christmas break. This is the amendment to allow English NHS Trusts to raise half their income from private practice. At present only 2% of their funds may be derived privately.

This could be used to insist that you do this work as part of your NHS contract, for your basic NHS pay, while the Trust charges the patient or insurer premium rates for your work, and makes a profit on you.

The alternative is even worse. They could allow consultants to charge these private patients in the traditional manner.

This would be hugely divisive. The almost complete unity of the profession in opposition to the bill would evaporate, as a considerable proportion would suddenly see great potential financial benefit, and switch sides. And we all know how much bitterness, backstabbing and conflict is caused by consultants competing for as big a slice of private pie as they can get their grasping paws on.

Foundation Trusts will be expected to balance books or make a profit. Instead of controlling unnecessary investigation and treatment Trusts would need to treat more patients. This is not the thinking behind Kaiser Permanente and is indeed the opposite of their philosophy. It may well be fine to make money from rich overseas patients, but there is a limit as to the availability ofConsultant time. Ultimately NHS patients will suffer.

The current thinking of containing cost in the NHS by limits set to GP Commissioning will end up in many patients not getting the essential treatments they need and GPs being blamed for poor commissioning.

What perhaps the NHS should not ignore is one very important but simple way to contain cost: salaries for doctors, not fees.

The side effect of the current drive of GP Commissioning is that it would no longer matter if Foundation Trusts are private or not. Before long most Hospital Consultants would only offer their expert services via private organisations. Why else are the Private Health Organisations hovering around!!!

What can GP Commissioners do?

Do exactly what Kaiser Permanente is doing: integrate!!!

Integrate GP and Consultant care. Pay doctors at both levels salaries, not fees! In fact both the Mayo Clinic and the Cleveland Clinic pay their doctors salaries as well as the VA and a number of other hospitals including Johns Hopkins.

Yes, employ the Hospital Consultants; buy up the hospitals and buy back pathology and other services.

Not big enough: join up with other commissioners.

But Kaiser is not without problems:

When a person is diagnosed with an expensive condition such as cancer, some insurance companies review his/her initial health status questionnaire. In most states’ individual insurance market, insurance companies can retroactively cancel the entire policy if any condition was missed – even if the medical condition is unrelated, and even if the person was not aware of the condition at the time. Coverage can also be revoked for all members of a family, even if only one family member failed to disclose a medical condition.

The government and Kaiser may well argue that its not-for-profit status engenders different behaviour. But in the , the not-for-profits use the same tactics as the for-profits when the environment gets competitive. Kaiser actively seeks younger, healthier members and imposes different rates for employer groups based on their history and risk of healthcare.

Sometimes their competitive behaviour gets them into trouble. The  branch of Kaiser has had cumulative fines of $1.6m, 63% of all the fines levied by the Californian department of managed healthcare. The activities for which they have been fined include denial of care, use of unqualified staff and inadequate staff-patient ratios.                         From:  NHS-Kaiser Permanente: Which Bits?

IT COULD INDEED BE: