Finland is one of the few non Asian countries where their educational results matched those of Singapore and Hong Kong without spoon feeding.

They value their Health Care system and they protect their National Parks.

Looks like their emphasis on music education may be good for the grandparents too.

Although listening to music is common in all societies, the biological determinants of listening to music are largely unknown. According to a new study, listening to classical music enhanced the activity of genes involved in dopamine secretion and transport, synaptic neurotransmission, learning and memory, and down-regulated the genes mediating neurodegeneration. Several of the up-regulated genes were known to be responsible for song learning and singing in songbirds, suggesting a common evolutionary background of sound perception across species.

Listening to music enhanced the activity of genes involved in dopamine secretion and transport, synaptic function, learning and memory. One of the most up-regulated genes, synuclein-alpha (SNCA) is a known risk gene for Parkinson's disease that is located in the strongest linkage region of musical aptitude. SNCA is also known to contribute to song learning in songbirds.
"The up-regulation of several genes that are known to be responsible for song learning and singing in songbirds suggest a shared evolutionary background of sound perception between vocalizing birds and humans," says Dr. Irma Järvelä, the leader of the study.

In contrast, listening to music down-regulated genes that are associated with neurodegeneration, referring to a neuroprotective role of music.
"The effect was only detectable in musically experienced participants, suggesting the importance of familiarity and experience in mediating music-induced effects," researchers remark. 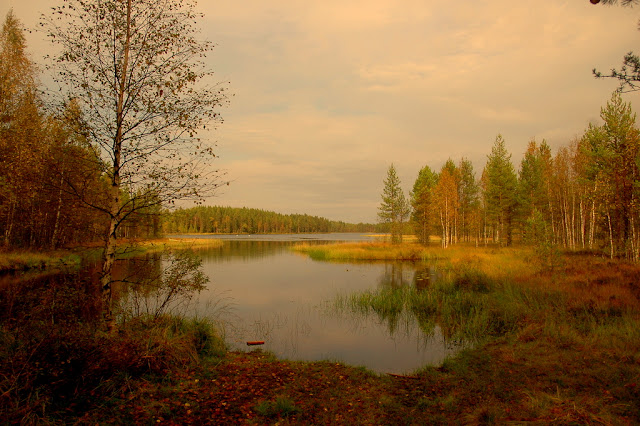 
Easter will soon be here and it is time for Bach's best music. 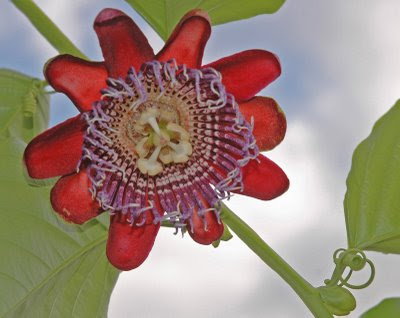 Passiflora alata ©2008 Am Ang Zhang
In the early 1600s, a Jesuit priest came across a Passion flower in  and was taken by its complexity and beauty. That night he had a vision, so the story went, that the flowers trio of stigma resembled the three nails used in the crucifixion; the stamens represented the wounds; the spiky purple crown above the petals, the crown of thorns; and the tendrils of the plant were the scourges. The name was a direct reference to the Passion of Christ. I find it peculiar that the plant has been found in the wild in every continent except Europe and .

In  the Victorians loved it and then fell out of love with it. Now it is making a comeback possibly due to the fruits’ popularity in modern gourmet cooking.
There are many varieties and some are edible. Of the edible kind there are two big groups, the one with the dark skin one and the one with the yellow skin.
The plant itself, from the stem to the leaves and the flowers, have been used by South American natives for various medicinal purposes, none currently approved by the F.D.A.

The fruit has some of the most concentrated fragrance of any fruit species. The charm is in its acidity which enhances the intense flavour and natural sweetness. With fine vanilla ice-cream it is a delight. It can be used as a topping for many desserts and famously for Pavlova. It is made into soft drinks and is often used in tropical cocktails. The golden variety is best eaten fresh and the dark skin ones can be left to mature as the flavour intensifies further.
With the golden to near blood red seeds, the fruit qualifies as a colourful non-green fruit, with all the necessary anti-oxidants. To me it is just flavoursome. 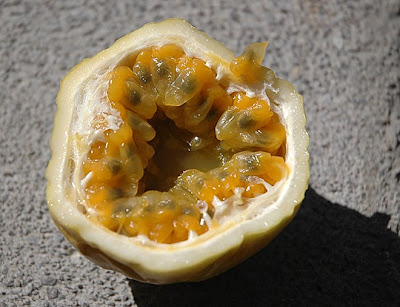 
As it is Easter I am listening to St. Matthew's Passion. Would this indeed be the piece of music to take to your desert island?

“On the Easter music note, it is perhaps appropriate to mention Mahler’s Second Symphony: The Resurrection. The text of the music made no biblical reference and it was Mahler’s very personal view of life and his life was full of tragedies and suffering, with the premature deaths of his siblings and daughter, and his own heart disease. There has not been a greater composer to emerge since his death.”

The biologist Lewis Thomas when asked what message he would send to aliens famously said: “……Bach, all of Bach……”.

Richard Dawkins picked it as one of his eight desert island discs. Now you know.

The Guardian:Why we are shutting children out of classical music.
April 2, 2009 Tom ServiceTom Service is a 33-year-old classical music critic. For 25 years of concert-going he found himself to be amongst the youngest in the audience.
But there is something else that is strange:
“I've noticed that bus and train stations now pipe canned classical music, day-in, day-out, through their speakers as a way of stopping young people hanging around. So toxic have the associations become, that this experiment actually works: there is evidence that playing Beethoven and Mahler has reduced antisocial behaviour on the transport network.”
He went on:

“An entire generation, aged between 10 and 30, seems radically disenfranchised from classical music. How, and when, did this happen?”
Then in Finland:

“A couple of years ago, I saw a class of seven-year-olds in Helsinki enthusiastically learning Finnish and maths by performing sophisticated little songs with astonishing tuning and rhythm. And this wasn't a music school - just a typical Finnish state primary. Finland only developed its curriculum in the postwar period, but it works: today, the Finns are classical music world-beaters, and their education system has produced more great instrumentalists, conductors and composers per capita than any other country on earth.”
Esa-Pekka Salonen is of course the Principal Conductor of the Los Angeles Philharmonic Orchestra and Finland’s most famous music export in recent times.
I was at a concert recently and a large numbers of players in the orchestra were Koreans. Well apart from steel and TV and cars, the Koreans are now into golf and music in a big way. The LPGA is certainly dominated by Koreans. Could it be that music gave them the edge in golf as well, not just the chopsticks?

Tom again:
“Here is a ready-made answer to the problems of renewing classical music's role in society. Make them statutory requirements for every local authority, and give them the responsibility for rebuilding the network of classical musical possibility that used to resound throughout the country.”
And perhaps throw in golf for good measure.

It was in 1990 that American troops played deafening pop and heavy metal music day and night outside the Vatican Mission to Panama City that Noriega surrendered.

In future, this strategy might have to be changed, Beethoven, Mahler and God forbid even Bach.

“We've already lost one generation - we can't afford to lose another.”

Julie said...
It's a source of great sadness to me as a classical musician that classical music is no longer formally taught in the classroom as it was when I was growing up. It became the victim of a reverse elitism; that classical music was for snobs and also that ordinary folk weren't good enough to learn classical music and have it as part of their culture. It's a phemonenon that is particularly British; in Germany, they have big Bach choirs and in Italy everyone knows their Verdi and Rossini. The irony is that pop music is much more difficult to perform than your average Bach chorale, yet it's held up as the music of the common man. I think things are beginning to turn round, but I felt like chucking bricks through the telly when they were going on about these wonderful childrens' orchestras in Venezuala that were working wonders and keeping them out of trouble. We had a whole system of music schools and orchestras in Glasgow that were shut down one by one and the one that I teach at survived because we wouldn't give up and got various trusts to sponsor us.
Anyway, sorry about the rant. Yep, I would definitely take Bach to a desert island and send it to aliens; particularly the six Bach Sonatas and Partitas for unaccompanied violin, but that's my fancy.
April 5, 2012 at 6:39 PM

Cockroach Catcher said...
Thanks Julie. I grew up in poor post communist HK and fought for my own music education and valued it.

Both my girls are good musicians.

hyperCRYPTICal said...
As a child at primary and junior school level I lived in the leafy suburbs of a (then – don’t know whether it still is) affluent coastal town in Sussex.

Each morning assembly was rounded off with five to ten minutes of classical music and this is where my appreciation of it was born – love of opera was to come much later.

Classical music was not a feature of secondary schooling of either myself or any level of schooling in that of my children (who are now old(ish)) in the cold climes of my part of Britain where I moved pre-teen.

I have never seen opera live as in the city near to where I live now, despite its claim of culture for it does not offer it – or if it does it is so badly advertised I am never aware of it.

One of my memories of my late teens was to see The Red Army Choir live and I fell in love with the beauty of their wonderful voices. I still play an LP – slightly scratched as it is – I bought soon after this concert and it continues to ‘fill me up.’ (I have purchased DVDs but all – although being the songs on my lovely LP – are ‘modernised’ to such an extent that their awfulness has led to only one listening.)

I think my children (who bent to peer pressure and decided classical music was not for them) and indeed any child who does not know of classical music has a void in their life and unfortunately are unaware of it.

Cockroach Catcher said...
One of my reason to move to London after retirement.