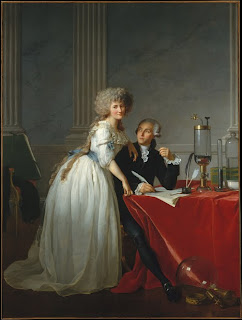 Antoine-Laurent Lavoisier (1743–1794) and His Wife
Jacques-Louis David (French, 1748–1825)
The Metrpolitan Museum of Art
"The Republic needs neither scientists nor chemists; the course of justice can not be delayed."   Judge sentencing Lavoisier to the guillotine, 1794.


To me, one of the joys of foreign visits is that of visiting art museums. At the New York’s Metropolitan Museum one of my earliest discoveries was that of a painting called Antoine-Laurent Lavoisier (1743–1794) and His Wife by Jacques-Louis David (French, 1748–1825). It was an unusual painting because of the story behind Lavoisier.
On my first visit to the Met, I bought a newly published book called The Metropolitan Museum of Art, Favorite Paintings by Hyatt Mayor and in it he wrote:

“His lasting achievement was to establish modern chemistry by drawing up the first list of elements and by analyzing the character and function of air and other gases”
“The intimate grandeur of this painting would alone make it one of the greatest portraits of its century, while its human associations surcharge it with a shiver of wonder."
It is comforting to note that the likes of Dr Grumble were only warned not to blog during the run up to the election. How lucky we are, really! Think guillotine! Think Cambodia!
Metropolitan Museum of Art: Antoine-Laurent Lavoisier

The instruction did clearly state that blogging should stop in the run up to the election which does imply that it is sanctioned at other times. It's an important nuance I had missed until you pointed it out here.

Although recent history showed that one might get enhanced pension and millions of pounds of pay off instead of the guillotine.

The number of people in PCTs waiting to be made redundant is frightening.

PFIs will be set up to deal with PCT redundancies.