Anorexia Nervosa: What If!

There is a misguided belief that Psychiatry is like other branches of medicine, that we make diagnosis as if we know the definitive cause, course of treatment and prognosis.

I accept that even in other branches of medicine, what we used to know sometimes can be turned upside down overnight. We only need to look at the evolution of the understanding and treatment of Leprosy and Tuberculosis over time, and in the modern era, that of HIV/AIDS.

I was brought up to understand that “scientific truth is nothing more than what the top scientists believe in at the time.” In this modern era of “biotech” approach to medicine, new understanding is yet to be found for many conditions. In these cases, are we content to continue with empirical and symptomatic approaches?

Anorexia Nervosa comes to mind and this is one of the conditions that have for want of a better word captured the imagination of sufferers and public alike. I have already posted an earlier blog on its brief history.

Sometimes a diagnosis as powerful as Anorexia Nervosa can be a hindrance to the improvement of “sufferers”. Over my years of practice, I found that those who did well were cases where we indeed moved away from the medical/conventional psychiatric model to a somewhat paradoxical approach.

Let us consider a couple of “WHAT IF” scenarios.

What if in DSM V (the next edition of DSM), Anorexia Nervosa was voted out by the psychiatrists as a mental condition? (As they did with Homosexuality in 1973.) What if the European Court of Human Rights deemed it against human rights to forcibly treat Anorexia Nervosa? (Remember Ghandi?)

My speculations are that under these circumstances:

1:A third of the parents would take over and make sure that their bright young offsprings eat properly and stop blaming adolescent units for failing them.

2:A third would have rich enough parents who would pay for their expensive treatment in health farms.

3:Some would be snapped up by modelling agencies as the world is hungry for skinny models.

Ah, what about mortality rate? That would be same as now or lower.

This is only one child psychiatrist’s conjecture.

The reality is that the availability of force feeding as a last resort often leads to complacency in the Psychiatric Team. Creativity is key to the resolution of many Child Psychiatric problems and the fact that Anorexia Nervosa patients can change dramatically in a split second is testament to the need for such an approach. (The Chapter “Seven Minute Cure” in The Cockroach Catcher describes such a case.) I am not advocating the declassification of Anorexia Nervosa, but would just like to encourage those of us dealing with these cases to try to understand the underlying dynamics and be innovative in their management. It could be a worthwhile experience.

Perhaps we can set up the new iPhone 3G as iAnorexphone and the Psychiatrist’s computer can watch his patients at meal time, gym and wherever else while he is busy blogging. 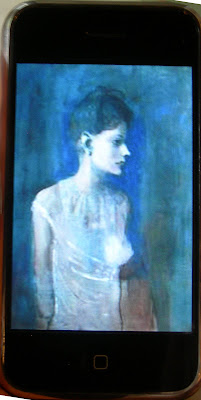 We need to think outside the box, and not just treat symptoms.

I'm not sure what to make of your observations.

I agree that the DSM is failing AN patients, but I'm guessing not for the same reason you are thinking.

What are these underlying issues you speak of? And why do you think mortality rates won't change?

Mostly I think that the DSM fails everybody. Somewhere along the line psychological disorder got confused with medical disorder. The words originally had two different meanings and two different contexts, with the former being: "A disordered mind". Not a disease, not a biochemical imbalance, just a mind not functioning the way it's supposed to.

It's a simple but powerful statement, and if we view psychological ailments as such, would lead to greater empowerment of our patients and greater creativity and insight on our parts.

Psychodynamics trumps psychopharmacology 9 times out of 10 (disregarding such ailments as schizophrenia...possibly). Psychopharm and medical treatment are a matter of alleviation of symptoms, but they do little to attack the real cause of a disorder.

Thank you for this post! Labeling can become a hindrance to a cure primarily because it also to a large extent dehumanizes the patient.

Remember “The Blind Men and an Elephant”

We all experience different presentations of Anorexia Nervosa. Psychiatrists may have seen more than others. The trouble with Anorexia Nervosa is that it may not be a single Elephant or even one at all.

DSM is more an attempt to allow for communication between clinicians so that researches can be comparable. Various versions of DSM have been subjected to tests for validity, and even with the same clinical interview vignettes, agreement between clinicians have been found wanting.

However, my point is not about that but about empowering parents. Then of course only a proportion of parents can rise to the challenge.

Psychiatrists need to realize that brut force is not the best way to establish a therapeutic alliance and certainly compulsory treatment and tube feeding has not changed mortality rate, as concluded by a a paper published in 1999 in the”British Journal of Psychiatry.

As such it is reasonable to speculate that taking away the compulsory aspect of treatment may not in the end increase the mortality rate. It is worth noting that starvation and its related effects are only the causes of some deaths, not all.

Many parents of my anorectic patients are themselves in positions of authority, CEOs and Professors. For them failure is not in their everyday language. The temptation to pass on the failure to others is high and who better than the Psychiatrist.

Thank you Indian Cowboy. For a long time I did not need to worry about coding and labels. Soon that was changed. In the end, if we helped what would the coding matter. When money and insurance is involved, our life and patient's life changed.

It does seem that we are looking at different parts of the same beast.

But I don't think that makes us both right, but about different parts. I think some of us are making wrong assumptions about the beast.

I don't think it is, and the problem with compulsory treatment is that it doesn't go far enough (weightwise) and doesn't go long enough (the 6-12 months at full weight).

Your statement about parents dismays me. A lot.

If someone you know manifests a symptom of Anorexia or any eating disorder, it is important to talk about the need for a treatment.
Anorexia

Very nice. I am very happy to post my comment in this blog. I gathered lot of information from this site.

Find the latest Bulimia news and discuss the latest topics with members of the Bulimia and Eating Disorders Community.