My friend just returned from a month at Spring City Golf & Lake Resort in Kunming, Yunnan. He showed me the score cards. 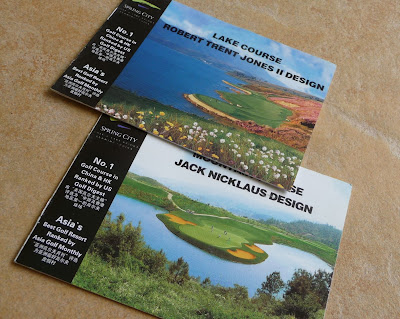 One golf course was designed by Jack Nicklaus and the other by Robert Trent Jones Jr. 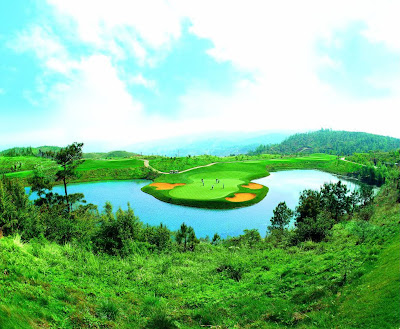 Spring City Golf & Lake Resort
“You have to go. The weather is perfect, and so are the courses. You can play 18 holes and not sweat. The ball goes further at this altitude and the caddies are just wonderful.”

Kunming happens to be my birth place. It is north of Vietnam and is well known for its biodiversity and superb year round weather.

China, which just celebrated 60 years of Communist rule, is now embracing golf in a big way. Most golf courses are designed by big name western golf designers or golf champions turn designers. It must indeed seem ironical, as golf is seen by many as a game for the elite. Venezuela has just banned golf for that reason.

Changes in China since the early 80s have been phenomenal. First it abandoned the “Barefoot Doctors” that was started by Mao when doctors and intellectuals were seen as the elite and sent to remote villages to farm. “Barefoot Doctors” with minimal training cannot really deal with more complicated medical cases. It is a shame that we in England do not seem to have learned from the bad experience of China and the politicians have been pushing ahead with reforms in the NHS with the result that “Barefoot Doctors” known as Noctors (Dr. Crippen) are taking over.

At the height of the “Cultural Revolution”, the piano was seen as the definitive sign of bourgeois decadence.

Petroc Trelawny wrote in The Spectator that Fou Ts’ong (one of my favourite Chopin pianists) was forced to seek exile in London, where he later heard his parents had fatally poisoned themselves. Liu Shih Kun, who came second in the Tchaikovsky Competition when Van Cliburn won, was imprisoned by Madame Mao. He survived and has now established a number of piano kindergartens across China, in response to the craze created by Lang Lang’s performance at the 2008 Beijing Olympics. Many Chinese parents now want their children to learn the piano. The BBC reported that an estimated 30 million children in China are now learning the piano. BBC
Is the piano China’s answer to the problem that is facing many parents in the west, i.e. ADHD? Could it be a novel substitute for Ritalin and other stimulants? With the advent of unproven modern approaches to education at all levels, very few subjects require memory work. Yet in the last decade or so, memory work has been shown to be beneficial to “brain power”, leading to a whole new approach to neuroplasticity. Learning a musical instrument is one way to give the brain the right amount of training.


For now, just as the west is abandoning classical music training as part of the school curriculum, parents in China are paying for their children to have piano lessons. By some reckoning, North America probably consumes 90% of Ritalin and similar stimulants, whereas China is probably consuming 90% of the pianos produced. One factory in the south of China is currently producing 100,000 pianos a day.


Some will argue that such pressure on children is not good. Yet we have to look at Michael Phelps, whose parents abandoned drug treatment for his ADHD in favour of swimming. The modern Chinese parent may indeed have stumbled upon something similar to Michael Phelps’ swimming in dealing with problems of concentration. Many parents actually believe that the discipline of learning the piano is helpful in building a more rounded person, although some may have aspirations that their offspring might be the next Lang Lang.
As China now moves into a new era, the piano practising child may have something else to practise: golf.


The Independent reported that it is the new game that is the game of choice for China’s new elite.


My friend told me that when he was at the Spring City Golf & Lake Resort, a nine year old just won a junior tournament. The boy was only 9 and he scored 71 on his final round playing from the red Tee
He may well be the next Tiger, a piano playing Tiger.