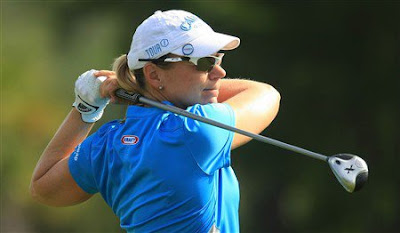 Recently I was fortunate enough to be at the Ginn Tribute, hosted by Annika (an LPGA event). I am a firm believer that amateur men golfers stand to gain a good deal more watching top women players than top men players.
Sitting at the first Tee one got to learn the etiquette of the top players. They all shook hands with the Official Starter and the LPGA Rules Official, of course, but they also shook hands with and thanked the volunteers on the first tee. Such tournament requires a large number of volunteers – 900 in fact for the Ginn Tribute.
Then you watched their stretching and warm-up swings, and it was interesting to watch their “energy” preparation.


I was totally surprised. Perhaps I should not have been. Apples and bananas remained the top favourites, together with plain bottled water. I must be fair, some, especially the Caddies, did pick up the proprietary drink: Gatorade. Perhaps it was because the caddies had to carry the heavy bags and the temperature was drifting into the 90s, but the lady players were probably concerned with the high glucose/fructose/sucrose content of the drinks.


Then I saw this in the New York Times:
Real Thought for Food for Long Workouts
“DR. MARK TARNOPOLSKY, a muscle physiology researcher at McMaster University in Canada and a physician, knows all about the exhortations by supplement makers and many nutritionists on what to eat and when to eat it for optimal performance. (He won the trail running series in 2004, 2005 and 2006.)
……So might his colleague, Stuart Phillips, a 41-year-old associate professor of kinesiology at McMaster who played rugby for Canada’s national team and now plays it for fun.”
Would it surprise anyone as to what they actually do:
“……neither researcher regularly uses energy drinks or energy bars. They just drink water, and eat real food. Dr. Tarnopolsky drinks fruit juice; Dr. Phillips eats fruit. And neither one feels a need to ingest a special combination of protein and carbohydrates within a short window of time, a few hours after exercising.”


Put simply: eat real food and have regular meals.
What has Cholera got to do with all of this? You may well ask.


From The Advances in Physiology Education:
“Few afflictions have attracted as much attention and impacted on as many societal and biomedical areas as cholera…….The finding that cholera was due to the ingestion of contaminated water lent to the demise of the prevalent ‘miasmatic theory of contagion, set the platform for the ‘germ theory of disease,’ and promoted the growth of public health concerns for water purification and sanitation. More recent attention to this disease led to the notion of ‘secretory diarrhea’ and the translation of basic principles to the development of oral rehydration therapy and its ‘spin-offs’ (Gatorade and Pedilyte).


G. Schultz University of
Cholera is caused by the organism Vibrio cholerae. Alert readers will note that Vibrio has caused much excitement because of the phenomenon of Quorum Sensing.

I well remember ’s cholera epidemic in 1961 and the major cause of death was the rapid loss of fluid due to a specific secretive action of the cholera germ. Patients could die in a matter of hours. The medical profession has long been of the strong belief that Intravenous Fluid (IV Fluid) is the only answer. In that situation, the patient is in shock and to find a vein means a cut-down: literally cutting through the skin to find one. It is a messy business as the patient is violently pumping out fluid in the most horrendous fashion.
Johns Hopkins established a centre in in the 1960s to study precisely a better way to replenish the fluid. IV fluids were expensive to manufacture and required medical personnel to administer. Their Clinicians sought help from basic physiology and carried out the first carefully controlled study which showed that intestinal perfusion of cholera patients with saline solutions containing glucose strikingly reduced fluid loss. Put simply, the patients could just drink a glucose and salt solution and the glucose would allow the salt to be piggy backed and absorbed, thus sparing the need to use IV fluids.
“……These compelling findings, however, did not convince the medical establishment, who remained skeptical that such a simple therapy could substitute for traditional intravenous fluid replacement in severely stricken patients under epidemic conditions in the field.”


The World had to wait for a war, this time in Pakistan, when Bangladesh fought for its independence in 1971 and 9 million refugees poured into India and with them cholera. When IV saline treatment was exhausted, Dr Mahalanabis, who had worked at the Johns Hopkins Centre in , took the gamble and decided to prescribe a simple solution of glucose and salt in the right proportion for the friends and relatives of the cholera patients, thus saving at least 3.5 million people. Since that time it was estimated that such a simple and cheap remedy saved at least 40 million more lives.


No wonder The Lancet hailed the development of oral rehydration therapy (ORT) as "the most important medical discovery of the 20th century".


The scientists at Johns Hopkins and Dr Mahalanabis received the Pollin Prize of $100,000 in 2002.


In 1965 Robert Cade, Director of University of Florida College of Medicine’s renal and electrolyte division, hit on the idea of mixing the sodium and potassium salts with sugar for the University Gator footballers:
“'The solution,’ Cade recalls, ‘was to give them water, but with salt in it to replace the salt they were losing in sweat. Also, give them sugar to keep their blood sugar up, but not so much sugar that it would upset their stomachs.’
By all accounts, the first batch tasted so bad none of the scientists could stomach it, but when Cade’s wife suggested adding lemon juice, the drink that would soon become known as Gatorade was born.

According to legend, the first on-the-field tests of Gatorade came in a scrimmage between the Gators B team and the freshmen.”


Since 1973 royalties from Gatorade brought $80 million to the University.
Cade died last year at 80 years of age.


The latest development is that Gatorade just launched Gatorade Tiger, a sports drink endorsed by Tiger Woods for a reported fee of $100 million over the next 5 years.
Compared to this endorsement fee, the $100,000 prize money for the inventors of ORT that saved at least 3.5 million lives seems like a small figure.
Golf Posts:
Golf and Disability
Golf and Health
Autism, the Brain and Tiger Woods
The Open and The Brain
Ancient Remedy: Modern Outlook
Tiger Woods and Breathing
Posted by Am Ang Zhang at 12:29 AM