Yesterday I had to finish on the twelfth hole because one of the foursome twisted and hurt his back so much that we had to get him to the hospital. Being known as the doctor on the golf course has one major side effect: strangers tell you their medical stories.

When I started with this club at the beginning of the year I played with this man who only comes here in the winter.  For the rest of the year, he works up north maintaining gardens. He negotiated a two-month membership. Golf etiquette dictates that you shake hand with your playing partners, but he said he had this skin condition and was not sure if it would be infectious.              On learning that I am a doctor, he started to tell me that he was rather concerned as not only his hands but his whole body seemed to be covered in what looked to me like eczema. I refrained from commenting. This man is interested in a lot of things and one does not get bored playing with him. He is knowledgeable about gardens and grass in particular. My wife was my caddie that day and she found him interesting too.
Then he disappeared. One week, two and then three.
Imagine my surprise when he reappeared one morning and the first thing he did was to shake hands with me.
I must have hesitated a bit. He said, “It’s all right. It’s not infectious.”
Apparently his skin got so bad he went to see a specialist. They discovered he was allergic to shell fish.
“But I never had shell fish,” he told them.
They then found that he had been taking Glucosamine with Chondritin for his back pain. He has been doing so since his aunt gave him some seven years ago.
There seems to be more allergy nowadays, and I have often wondered why this is happening.
This episode throws up something interesting I have observed since becoming a doctor. We all have different views on who to listen to as far as advice is concerned. It seems doctors still top the list and I have often had friends asking me for a second opinion. I did not think much about it at first as I was getting used to it. Now I realise that a second opinion from a doctor who does not charge a fee is considered most valuable.
Money has spoiled everything. In fact, half way through writing this, I had to deal with an enquiry from about some doctor’s recommendation to remove a kidney. Since a high fee was involved, a friend wanted my opinion, although I was given nothing more than an MRI to work on, and I am only a Child Psychiatrist.
In my book, I commented:
“……Most medical students with any emotional problem do not seek help from their psychiatric department but from the professor who drives the most expensive car……”
Most people traditionally choose to believe in their hairdresser, bartender, spar attendant and nowadays their personal trainers.
My new friend’s aunt was rich and gave him the first batch of Gucosamine with Chondritin. He trusted his aunt, and his back did improve very quickly. His aunt was doing well on it and as Glucosamine is a natural product it must be safe. No, he does not blame his aunt.
(Mmm…., cocaine is natural, so is opium, so are a number of other things.)
He has not been allowed out and has wasted nearly half his golf membership. He is glad though that he now knows what his problem was.
Golf without doubt is very stressful for the back, but it has a range of health benefits, or that was what I was told when my wife encouraged me to start having lessons. Now I realise the health benefit is for her as she now has at least five hours of freedom from me everyday. Here is a warning for those ladies who want to do the same: golf is the only addiction I know for which there is no cure.
Joking apart, here are the benefits I have observed:
Walking – Walking has always been regarded as a good exercise for health maintenance. Yet some courses, especially those in the do not allow you to walk. Slowing down play does not make economic sense. So what can you do? My advice is make sure you do not get too good at the game. That way you will need to do a lot of walking looking for that little white ball. Perhaps that is why I am still not that good! Another way is to make sure you play with someone else and let him drive the cart. He will feel honoured and you can have the exercise. There is also fresh air and beautiful scenery if you remember to look. 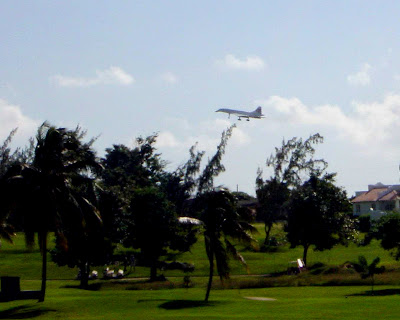 
Mental – You are aware that you need to get five things right all at once when you try to hit the ball. This is good to prevent early aging or whatever they call that illness, “Alzh...something…mer”, sorry, I forgot. Also if, like me, you meet new faces most days, you exercise your brain in another way. Experts now feel that seeing new places and meeting new people are two important ways one can use to exercise the brain. You can of course supplement golf with Bridge or Mahjong.
Finally, maintain a healthy attitude. In golf, always blame something else but not yourself -- one of the first lessons I learned when I started.
And, remember to do the deep breathing. Who knows? You might putt like Tiger one day. 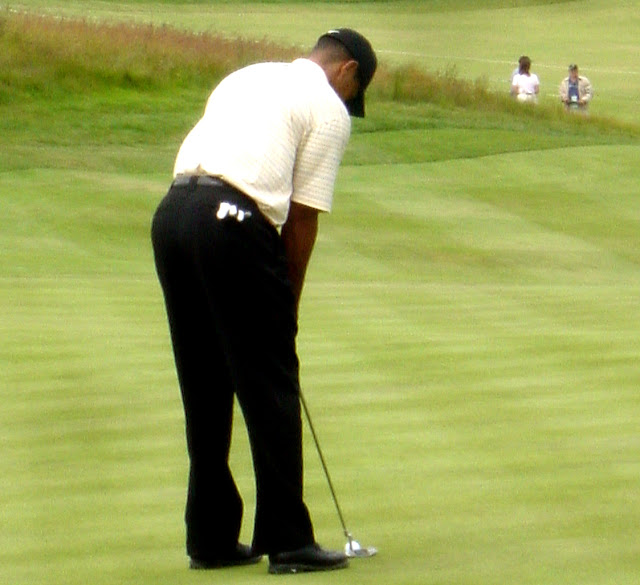 I was caddie to my husband (who actually carried the bag because it was too heavy for me while I held it to free him to hit the ball) some years ago. It was just a few days ago when I asked him why people like to play golf (before I read your blog). The other side of the question is why I have not developed an interest in it. I am not a sporty one to begin with. Ping-pong is one of the few games I like. I have actually voiced my desire to play it last week except that there is no such venue in town. How I miss the ping-pong table outside my childhood home and those in the high school I graduated from! My husband was quite surprised with my ability to play ping-pong the first time he saw me play. That was my famous "secret" which came to light eight years after we were married.

Nonetheless I enjoy going to the golf course largely for the serene scenery. Maybe I lack the patience for playing golf.

Thanks for your comment. Now you have given me an idea for my next posting. I used to play Ping Pong and in my book "The Cockroach Catcher" there is a story of how the child psychiatrist used Ping Pong in one of his cases. It is still a fun game and if you are good at it, you will probably be good at chipping and possibly putting in golf. It is the training of the finer wrist movements that count. If you also play the violin, then you have even greater potential!

Is that the case? I didn't know it's about finer wrist movements... I'll quiz my hubby to see if he knows.

I didn't take violin lessons though I enjoy violin music. I am quite surprised that I have learned to play the piano 'cause repetitive actions drive me nuts. I must say that I didn't practice as much as I should have. Most of the time I put practice off till the day before the piano lesson.

I took a Royal School Grade 8 Examination some 30 years ago. I just made the passing mark. (My stomach hurt like crazy as soon as I finished.) My score on the play-by-sight piece saved the day. It may be interesting from the psychological perspective that I failed the scale portion as it was the first thing tested. On top of not having practiced enough (blame it on a family trip to England and France :)) I was a nervous wreck at the beginning. By the time I got through the required pieces (or by the time I finished torturing the examiner) I gathered that it was a done deal, that I probably failed the whole thing miserably. I remember telling myself that I couldn't do any worse than what I had already done. I was then able to relax and made a conscious choice to play the sight-playing piece at a tempo much slower than indicated and focused on the melody to make sure that it came through without sounding broken. I made up some notes with my left hand as I proceeded. Playing the piano at church seemed to have paid off as I had learned that no matter what happened I had to play the melody and finish the song! My score for the sight-playing piece was near perfect and put me right at the passing mark! I think the examiner also wanted to make sure that I didn't have the opportunity to torture him or other examiners in the future.

I learned the importance of being able to relax from that experience, which I believe contributes to better performance in art or in life. I also applied the lesson of "focusing on the melody" especially in the past few years, that I focused on how much Christ and family love me, the purpose of my life and my calling regardless of the crushing circumstances and my feelings in order to persist in "finishing the song." The latest "song" I finished playing was a degree program and by God's grace I graduated!

I don't know if I'll ever learn to acquire the fine wrist movements for playing golf. I'll be quite satisfied if I can get to play ping-pong in the near future. Looking forward to your blog on the game. By the way, do you know the name of the Chinese toy made of a bunch of feathers attached to a pile of newspaper (about half-an-inch thick, 2 inches in diameter and round in shape) to be bounced with the foot? I was pretty good at that when I was...hm... a kid.

Good for you with your piano playing. As it happens, one of the blogs I shall post touches on music and the brain.

I know the toy well. It is called the “yin” or foot shuttlecock.

Thanks! I also saved the page with the recipe for braised goose/duck.