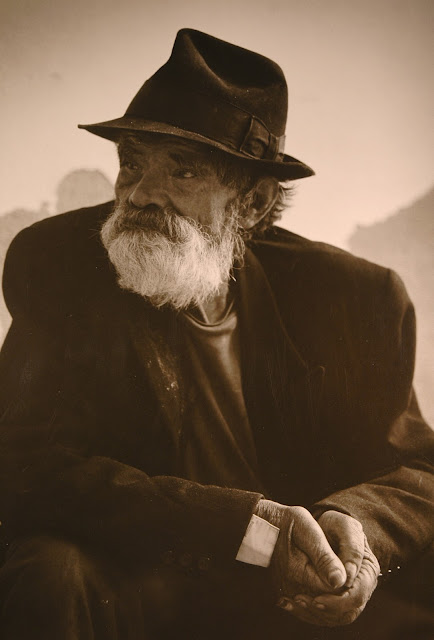 Selenium Toning is for archiving prints and imparts a lovely tone depending on concentration.

Excellent portrait - you can almost hear him thinking.

It's the light that does it Anna, but the man is actually 'blank', staring without thought ... and that's the brilliance of the photography here; capturing the 'nothingness' that comes with dispair ... and poverty

... but I never liked the word 'underclass' ... or 'subhuman', two of the same vocabulary, because of the degradation to humanity that is associated with such expressions. Surely, humanity with all it's ills, is still less vicious than that, or am I underestimating our 'exclusive' arrogance?

Well done, as usual, CC, you've made me think, and stirred some emotions :-)

With the recent debate on the UNDERCLASS I thought I would do a send up without words.

I am glad you liked the portrait. Photography portraiture is difficult as it was only a split second thing unlike painting which often takes many sittings (painting from photo is the modern way and that is why much of the BP stuff is not good in my humble opinion.

Sarcastic play, funny too, in parts.

... one of the most amazing, and very disturbed, paintings done from a photo, is [Gorky's mother and child]. He was influenced by Cezanne and Picasso, but that painting has something, a life of it's own, despite it's artist death long ago ... I find it scary and very disturbing ... Gorky needed you CC, check him out :-)

In Thailand and other Buddhist countries, the monks are doing a good turn to us ordinary people by begging so that we can buy our way out of hell.

It is the same with many Catholic countries and Portugal is one of them.

He was given some bread so from under his seat he pulled out some raw garlic cloves and ate the bread with it. He is going to live a long life.

My old man was doing good, much good.

COI: I did give him some money, after the photo of course.