It is often inconceivable that a small bird of the warbler family can play host to the Cuckoo, which obviously outsizes it by at least three to four times. 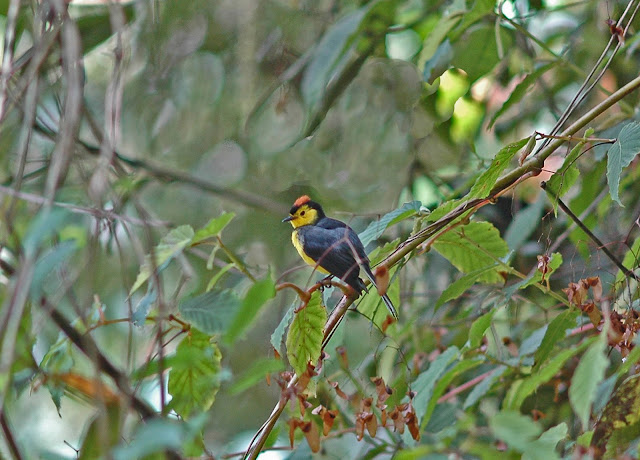 Collared Redstart
(This picture was taken in , famed for the abundance of different bird species and as far as I know there are 14 species of Cuckoos in the country.)
I mentioned in passing in my book “The Cockroach Catcher” Jenner’s observation and the stir it caused. When I visited his home in Glouscestershire, the curator of the small museum, who was extremely knowledgeable, took pride in telling us how Jenner’s great work on Cowpox vaccination upset the medical establishment on the one hand, and how his observation on the murderous ways of the Cuckoo newborns upset the gentlemanly world of the Ornithologists on the other. It was the Royal Society that awarded him a Fellowship for his keen observation.
His work on Cowpox vaccination in the prevention of Smallpox was met with hostile responses. The medical world that was dominated by  at the time could not accept that a country doctor had made such an important discovery. Jenner was publicly humiliated when he brought his findings to. However, what he discovered could not be denied and eventually his discovery was accepted – a discovery that was to change the world. Such discovery was due mainly to his keen power of observation, observation without pre-conceived ideas or moral judgment. He now has the last laugh in as his statue stands in a quiet part of .
Brian Martin said in his book “Dissent and heresy in medicine: models, methods and strategies”:
“An orthodoxy that draws on the full range of resources, namely which exercises unified domination, is incredibly difficult to challenge. Many challengers subscribe to the myth of scientific medicine as being based on open-minded examination of evidence, and thus handicap themselves, since in practice they are ignored or attacked”.
First appeared on February 14, 2008


“Ideas without precedent are generally looked upon with disfavor
and men are shocked if
their conceptions of an orderly world are challenged.”
Bretz, J Harlen 1928. Dry Falls-Thinking Outside The Box


SARS, Freedom & Knowledge
'The Knowledge' and the Brain
Posted by Am Ang Zhang at 7:42 PM

This post reminded me of an article I read in a newspaper many years ago detailing the refusal of the medical world to accept that Helicobacter Pylori was a possible causitive agent of gastritis, gastric and duodenal ulcers.

Googled to rejog my memory and it appears that Warren and Marshall were indeed ignored for many years. Borody's triple vaccine also took many years to be accepted as an effective treatment.

If I remember correctly, Big Pharma played a big hand in suppressing this discovery - for its acceptence by the medical world would cost them dear.

The other one is of course Lithium.