Earlier in June in 2009 we spent some time with our friends in . Somehow the after dinner conversation turned to the Pre-Raphaelites and our hostess promptly produced a book with an amazing painting on its cover.

In a chance encounter with Andrew Lloyd Webber, Josceline Dimbleby asked him bluntly if she could go and see the portrait he had of her great-aunt, Amy Gaskell. 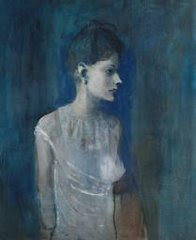 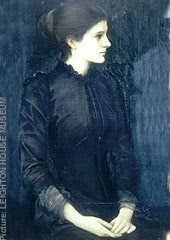 Girl in a Chemise Picasso

It is said that as a young man Picasso admired the pre-Raphaelites and Edward Burne-Jones so much that in 1900 he would have gone to  rather than  had he had the fare.


It was a fascinating book, like good family biographies are, as long as you accept that it is not going to be as organised as fiction. A good writer helps and Josceline Dimbleby is a well established food and travel writer.

Without the effect of drugs that would double the bodyweight, we have in the end one of the most beautiful portraits of the Pre-Raphaelites. Burne-Jones’ life is of course another psychiatric book: his mother died when he was six days old and many felt that all his life he was searching for the perfect mother he so missed. It is indeed ironical that the art world has been much enriched by what was essentially untreated bereavement.
........"Picasso assured me, when he was staying in  in 1950, that for him his [1900] trip to  was merely a halt on a journey that would take him further north to . He had conceived a great admiration for  and . . . some English painters, especially Burne-Jones."
Roland Penrose: Life and Work of Picasso.
This was first posted on July 20, 2009.

Girl in a Chemise