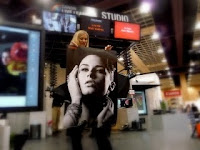 At the WPPI show in Vegas, I heard something that I thought was just sales talk. The Canon speakers said that the Canon 5D Mk II is better than any of the video cameras at the show.
No way, I thought, they were about 10 times the price.

One of the problems of Digital Camera for motion picture taking is the sharpness, not the lack of it, the opposite: too sharp.
I also heard that BBC and Reuters only allow their photographers to take video with DSLRs and no single shots. I think the editors wanted control. Not too good for the future Magnums.
WPPI Las Vegas: Digital Photography & Art
Photography: Old & New
High End Photography & Wine
House M.D. : 95% vs 5%
House M.D.: Modern Tyranny
House M.D. : Australia
Posted by Am Ang Zhang at 8:04 PM

I was there too and there were some $29000 high end video cameras there. I agree that there may indeed be a place for DSLRs in film making. Certainly for weddings.

BBC and CNN allow photographers to use DSLRs because they have to broadcast on media as to achieve certain objectives.
cheers
Rex