I played golf this morning with a keen amateur astronomer who recently acquired an 11” reflector telescope. Alas, the modern telescope makes life so easy. Those equipped with a "Go To Controller" can search out stars for you. He told me he had a most marvelous time watching the Lunar Eclipse last night. It will be nearly three years before the next full eclipse but there will be a partial one in August this year. NASA provides detail of future eclipses and of the past. 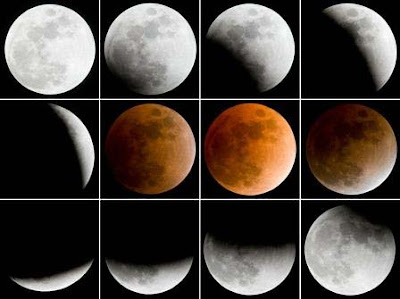 Then I thought to myself, as far as I can remember from early childhood, there is an old Chinese Tung Sing (Almanac) that has been used by generations of Chinese for deciding on important events. Farmers refer to it for most of the important ploughing, sowing, planting and harvesting schedules. In the almanac are also dates and times of eclipses.

In my book, I wrote:

“……the Jesuits were generally regarded as the greatest scholars. They brought Western culture and religion to the East. They must have had a glimpse of the Chinese understanding of the universe and the world. Yet for so long the religious view of Flat Earth held true. Did the Jesuit scholars know the truth or did they pretend not to in order to avoid persecution and possible death?....”

In the footnote I quoted Joseph Needham’s monumental work:

“…… Joseph Needham's multivolume Science and Civilisation in China is recognized as one of the great works of historical scholarship in the twentieth century. The conception of world history that frames and shapes its arguments, however, has gone unnoticed……”

In the west, scientific discovery and progress was hindered by religious dogma and it is not my intention to further labour the point. In the hindrance came not from religion but often from the rulers. It is well known that the First Emperor burnt books and buried scholars in an attempt to ensure that his people were not and would not become too knowledgeable. The opera, The First Emperor, is based on historical records and reveals an aspect of dictatorial control on culture and in this case, traditional music. It is a powerful opera, a true fusion of East and West.

Fortunately astronomical studies in were later sponsored by the state and from ’s account, our early astronomers were astonishingly observant and accurate. Needham noted that Chinese Astronomers in 170 B.C. “……gives the unexpectedly accurate values of 584.4 days and 377 days for the synodic periods of Venus and Saturn; the modern values are 583.92 days and 378.09 days……” . They were very accurate too with tidal predictions. In contrast, Christopher Cullen of the Needham Research Institute noted how “palpably fallacious” Galileo’s pet theory of the tides were.

noted that the arrival of the Jesuits in in the 16th Century marked the end of the independence of Chinese Science and Culture. Christopher Cullen noted that “……The Jesuits were naturally first and foremost Christian missionaries, and their scientific work (much of it astronomical) was intended to aid their religious teaching by adding to the prestige of the culture they represented…..”

……The damage done by the Jesuits was not so much a result of their initial conservatism, but of their continued clouding of the issue until well into the eighteenth century……”

I am enthusiastic about . His work was introduced to me by my first consultant in , and whenever I am in a good library, I would just pick up any volume with a title that catches my interest that day and read through it. I have often wondered what the point is of limiting such work to a few scholars instead of sharing it with the rest of the world. Let us share knowledge!

History,geography,photography,cooking,psychiatry,moon eclipses...what next? Dr Zhang's blog is an absolute must. It is simply compulsive reading, with pictures as well. Keep it going, Doc.

My first total moon eclipse: in early 40ies in St. Gervais, my mother woke us up to see. There were numerous owls flying and hooting, their eyes shining in the dark, an owl jamboree. The next day, in the fields, there were numerous dead mice and voles that they had been hunting.