Mother Nature should be ecstatic

What has Lotus got to do with us apart from being very beautiful to look at? 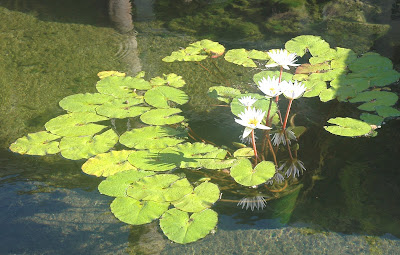 Photo of lotus taken in Maui

That is precisely the point. Often they grow in murky waters and yet they always look so pristine? Have you ever wondered why? Well, this lotus phenomenon has inspired a German scientist to invent a self cleaning paint.

“……STAY CLEAN LIKE A LOTUS PLANT. A researcher was intrigued by the way lotus leaves stay clean without the use of detergents. Upon investigating, he found that the plant’s leaves have nanoscale mountains: When dirt particles fall on the lotus, they teeter on these nanopeaks until they’re washed away by wind or rain. Building on this idea, a German company, Sto AG, found a way to formulate a self-cleaning paint, Lotusan. The lotus idea has led to approximately 200 pending patents for items such as paints that will keep barnacles from sticking to ship hulls, self-cleaning roof shingles, and even a fabric so waterproof that it can be submerged for 24 hours without getting waterlogged.” – quoted from Inspired by Nature, an article in the inflight magazine “The AmericanWay”.

It is human nature to be critical. It is now a habit of most, especially intellectuals, to be critical of big corporations. You give them credit at your own peril. So the Cockroach Catcher is risking his reputation by quoting from this unlikely source yet again. This magazine is available free online so that you do not even have to be on the plane to read it. But, my goodness, it is full of gems!

“They say that imitation is the sincerest form of flattery. If so, Mother Nature should be ecstatic, because scientists around the world are patterning industrial processes and all kinds of everyday products after her designs. Welcome to the field of biologically inspired design….

……Some might claim that mimicking nature isn’t exactly new, though. Orville and Wilbur Wright studied birds while designing the first airplane. Velcro resulted when a Swiss engineer began to wonder how the seeds of the burdock plant stuck so stubbornly to his woolen socks. Engineers modeled the nose cone of the Japanese Shinkansen bullet train on the beak of a kingfisher. In the medical field’s search for therapies and cures, physicians have studied nature for millennia. (One of the common arguments made by conservationists is that pharmaceutical companies often find new drugs hidden in the biology of plants that grow in threatened places, like rain forests.) And in recent decades, medical companies have grown increasingly sophisticated at manufacturing joints, bones, artificial skin, and even cells that copy their natural counterparts……”

In the book The Cockroach Catcher, Dr Am Ang Zhang muses over Artemesinin:

“……This reminds me of the story of Artemesinin, now reckoned to be the most powerful anti-malaria drug. It was recorded in the Chinese book of Herbal Medicine, which is over a thousand years old, as treatment for swamp fever. Its rediscovery by China was met with scepticism until it was noted that during the Sino-Indian conflict Chinese soldiers were not dying from the malaria that was rampant in that part of the world. For a long time, the Chinese did not share the findings with the rest of the world. By chance along the banks of , specimens of the plant were found. It took some years before the drug was developed. By now it is the standard treatment of choice……”

Yes, I have written about this in a previous posting about “Yunnan” , but I am glad to have another chance to talk about it.