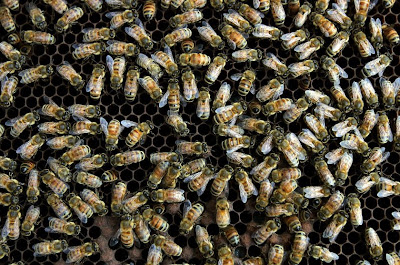 As we settled into our holiday condo I noticed that the porch was covered in a think layer of yellow powder. Normal dust is black. The tennis courts have green artificial clay, and as we are on the third floor not much of that works its way upstairs. What can this yellow powder be?

I turned on the television and after some channel hopping, found a Nature program. It reports that the Chinese are now artificially pollinating their pear trees. Wow. Just how many flowers are there on each tree? Well, is not short of this kind of manpower.

All this is of course to do with mysterious bee disappearances and CCD – short for Colony Collapse Disorder. When it was first noted, many theories were put forward. Was it due to a change to nicotine based pesticide? Was it due to the mobile/cellular phone transmitters? Or was it the effect of global warming?

An analysis of nectar collected by bees showed alarming results. In one sample, 40 different pesticides were identified.

Until now, I have thought that honey is the healthiest food around and that it can keep forever because of the antibiotics added by the bees. Maybe I need to revise my knowledge base.

Yes, did admit to using a lot of pesticides. After the last crop failure, they decided to collect the pollens and fertilise pear flowers by hand, using feather brushes.

By the way, when the pears are formed, every single pear on the tree is wrapped in a paper bag by hand. I remember doing the same years ago in our village home to protect the guava and loquat fruits. We only had a single loquat and two guava trees though.

Then, towards the end of the programme, all were revealed in a conference: CCD is caused by a virus (Israeli Acute Paralysis Virus -IAPV) originating from . As export their bees to the mainly, there is a serious money issue.

Where was the conference? . Who made the discovery? . Now, that could cause even more problems.

So, the cause of CCD is not pesticide, electrical waves or even global warming. Just a virus.

At least I know what caused my little local problem: as the bees are not collecting the pollens, the pollens get blown to our porch. The remedy: the well tested Chinese manual method. I proceeded to fill my bucket with water and fetch my microfibre mob.

Yet a couple of months later, bees were cleared by the USDA. The bees were not dropping dead like they should but just ran away from their colonies.

Wow. We still do not know.

However, if the problem continues and American orchards need to pollinate like the Chinese do, the labour cost would be US $60 billion per year in alone, not including or .

Bees did it for free and we even took their honey.