As we enjoyed the RHS show at Tatton Park, little did we realise how the average gardener and allotment enthusiast has suffered recently in switching from chemical fertilisers to “organic” regimes. 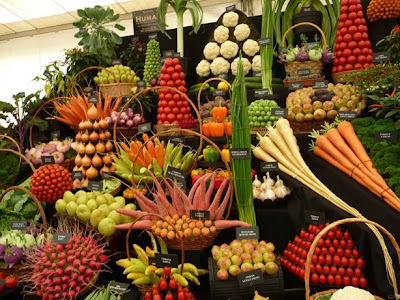 It would appear now that staying with simple chemical fertilisers may indeed have been better off for some.
The problem is with “organic” manure.

The Observer broke with the news a few weeks ago after gardeners approached the RHS and the government Pesticides Safety Directorate (PSD) with problems regarding distorted crops, particularly potatoes, tomatoes, peas, beans, carrots and lettuce.

Is any produce not affected?

“The Royal Horticultural Society (RHS) has been inundated with calls from concerned gardeners who have seen potatoes, beans, peas, carrots and salad vegetables wither or become grossly deformed. The society admitted that it had no idea of the extent of the problem, but said it appeared 'significant'. The affected gardens and allotments have been contaminated by manure originating from farms where the hormone-based herbicide aminopyralid has been sprayed on fields.”

I am not sure which is more palatable: deformed or withered. I doubt if I would eat either.

So the herbicide gets into hay, which is fed to farm animals, and the manure is now contaminated.

Dow AgroSciences, which manufactures aminopyralid, has posted on its website advice to allotment holders and gardeners. Dow was one of the companies that manufactured Agent Orange, the herbicide used in Vietnam.

“Aminopyralid is popular with farmers, who spray it on grassland because it controls weeds such as docks, thistles and nettles without affecting the grass around them. It binds itself to the woody tissue in the grass and only breaks down when exposed to bacteria in the soil.”

“Guy Barter, the RHS head of horticultural advisory services, said they were receiving more than 20 calls a week. He said, 'It is happening all over the country. A lot of cases we are seeing is where people have got manure from stables and the stables have bought their hay from a merchant, and the merchant might have bought hay from many farmers, possibly from different parts of the country. So they have no idea where the hay came from. So finding someone to blame is quite difficult.' Weedkiller in the soil should dissipate by next year, but in stacks of contaminated manure it might take two or more years to decay, he added.”

As the phenomenon is not localised I suspect we could be heading for another major food disaster.

Is anything safe anymore?

What if the chemical is not destroyed as quickly? And what if they cause health problems such as birth defects?