“Al Hicks was standing outside an old mine in the Adirondacks, the largest bat hibernaculum, or winter resting place, in New York State. 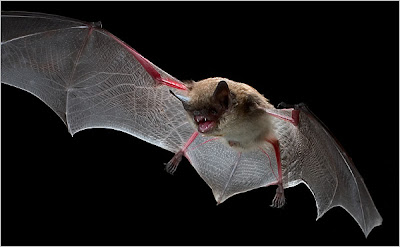 “It was broad daylight in the middle of winter, and bats flew out of the mine about one a minute. Some had fallen to the ground where they flailed around on the snow like tiny wind-broken umbrellas, using the thumbs at the top joint of their wings to gain their balance.”

No, this was not global warming and summer has not arrived early. This has been going on for a while now.

“All would be dead by nightfall. Mr. Hicks, a mammal specialist with the state’s Environmental Conservation Department, said: Bats don’t fly in the daytime, and bats don’t fly in the winter. Every bat you see out here is a ‘dead bat flying,’ so to speak.” New York Times March 25, 2008

As scientists are still grabbling with the problem of bees disappearing worldwide, the bats are facing a crisis.

In The Sunday New York Times:
As Bats Die, Closing Caves to Control a Fungus
By THE ASSOCIATED PRESS New York Times: May 3, 2009
“The federal Forest Service is preparing to close thousands of caves and former mines in national forests in 33 states in an effort to control a fungus that has already killed an estimated 500,000 bats.”
“Bats have been dying at alarming rates from what scientists call ‘white-nose syndrome,’ so named because it appears as a white powder on the face and wings of hibernating bats.
“Researchers believe the fungus is spread from bat to bat, but they have not ruled out a human connection, said Dennis Krusac, a biologist with the service’s Southern region.
“‘We don’t have the answers at this point,’ Mr. Krusac said.”
“One cave had 15,584 bats in 2005, 6,735 in 2007 and an estimated 1,500 this winter. Another went from 1,329 bats in 2006 to 38 this winter. Some biologists fear that 250,000 bats could die this year. 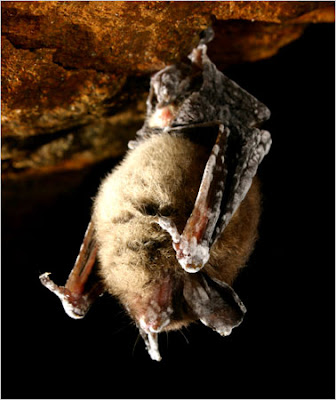 Bats dying from a mystery illness dotted with a white fungus. Al Hicks

“Scientists have pinpointed the fungus linked to white-nose syndrome, the mysterious ailment that has wiped out large populations of bats in the northeastern United States.
“The fungus, found on the wings, ears, and muzzles of infected bats, is a member of the Geomyces genus”
“Since the winter of 2006 to 2007, white-nose syndrome has caused 80- to 97-percent-mortality rates in some large hibernation colonies, putting some species at serious risk.
“The situation has experts worried, since a single bat can eat more than its body weight in bugs each night, aiding the fight against crop damage and disease.”
“……infected bats are emaciated, dehydrated, and starving, conditions that interrupt their winter hibernation cycles. The animals also likely have only enough fat reserves to survive hibernation.”

“Biologists are concerned that if the bats are being killed by something contagious either in the caves or elsewhere, it could spread rapidly, because bats can migrate hundreds of miles in any direction to their summer homes, known as maternity roosts. At those sites, females usually give birth to one pup a year, an added challenge for dropping populations."

“Nursing females can eat up to half their weight in insects a day, Mr. Hicks said.”

They help to keep mosquitoes under control.

“Other researchers want to know whether recently introduced pesticides, including those released to stop West Nile virus, may be contributing to the problem, either through a toxin or by greatly reducing the bat’s food source.”

thanks for the valuable information