It’s a Bird, a Reptile, a Mammal: It’s Platypus 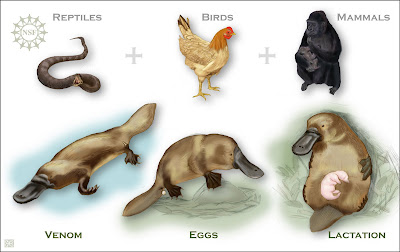 Courtesy NSF
The fact that Australia has some of the world’s strangely unique animals has always intrigued me. Being cut off from the evolutionary mainstream for millions of years, Australia specializes in really different plants and animals, the platypus being one such species. It is the platypus genome that recently created great excitement around the world.
Genome analysis of the platypus reveals unique signatures of evolution.

This study shows that platypus genes contain representatives from mammals, birds and reptiles.

When Captain John Hunter, the second Governor of New South Wales, sent to the U.K. a pelt of a platypus together with a sketch, the British scientists were at first skeptical and convinced that the duck-billed, otter-footed, beaver-tailed animal must have been a hoax produced by some Asian taxidermist. They even tried to look for stitches. 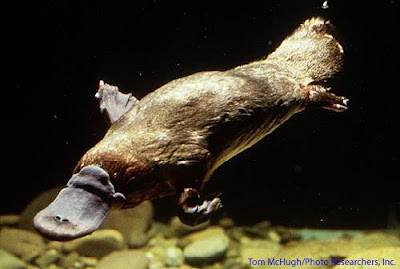 Has anything changed? Lithium and Helicobacter pylori are the two main recent medical discoveries from Down Under that have taken time for the rest of the world to accept.

The Platypus is a monotreme, which is a mammal that lays eggs and only three such species currently exist, the platypus and long- and short-nosed
echidna (small hedgehog-looking animals also known as spiny ant-eaters).

The article in Nature informs us:

“Other special features of the platypus are its gastrointestinal system, neuroanatomy (electro-reception) and a venom delivery system, unique among mammals. Platypus is an obligate aquatic feeder that relies on its thick pelage to maintain its low (31–32 °C) body temperature during feeding in often icy waters. With its eyes, ears and nostrils closed while foraging underwater, it uses an electro-sensory system in the bill to help locate aquatic invertebrates and other prey. Interestingly, adult monotremes lack teeth.”

An electro-sensory system? Wow. Pentium or AMD, I wonder. We thought we were clever.

“Only a handful of mammals are venomous, but the male platypus is unique among them in delivering its poison not via a bite but from hind-leg spurs. Despite the obvious difficulties in obtaining samples, it is now known that platypus venom is a cocktail of at least 19 different substances.”

It could apparently kill a dog. 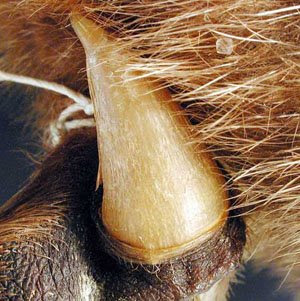 Spur for poison delivery in males(Photo:Cosmos)

Healesville Sanctuary in Australia has successfully bred Platypus. The twins are named Waddirrang and Burrun, to honour the Wurundjeri people whose lands encompass the area where Healesville Sanctuary is today. Both are second generation captive bred Platypus, the first to be bred anywhere in the world. Waddirrang, the name of the baby girl (pronounced “Woterang”), means platypus, and the name of the baby boy, Burrun, means dusk or night light.
For medicine, the genome discovery is important for our future understanding of genetic diseases in humans, as highlighted by the National Science Foundation, who co-sponsored the project with other countries:

“But new research proves that the oddness of the platypus' looks isn't just skin-deep. Platypus DNA is an equally cobbled-together array of avian, reptilian and mammalian lineages that may hold clues for human disease prevention.
It was the first genome sequencing project of a mammal that lays eggs, confirming that platypus DNA also looks like something of a patchwork.
‘Their genomic organization was strange and a little unexpected,’ says Batzer. ‘It appeared much more bird-and reptile-like than mammalian, even though it is indeed classified as a mammal.’
Having the genome in hand is a huge step for scientists seeking new details about evolution and human disease. The fact that the platypus is an ancient animal that is relatively primitive and unchanged may be a scientific boon for researchers.”

"DNA contains small 'mobile elements' that make copies of themselves and then are inserted elsewhere into the genome…… In reality, they cause insertions and deletions which can lead to genetic diseases in humans and they are also involved in the creation of new genes and gene families……We hope to, in time, identify the underlying causes and methods of disease prevention in humans."
You may wonder why the study was not funded and led by Australia, I wonder too and found the answer here:

“So why did Australia miss the bus so ignominiously? Maybe Government and their advisors thought that we can get it all for free, and some senior scientists hoped this ‘DNA stuff’ would go away so we can all go back to old fashioned biochemistry. What a blunder! Genomics is fundamental to biochemistry, medicine, pharmaceuticals, agribusiness, forensics, ecology and wildlife management.”

I seem to recall that some country in the old world has been as short sighted when it comes to research funding.

It is one of the most bizarre animals on the ground, it is like a combination of some animals, awesome animal.