From the Cockroach Catcher:

“……Without a proper job, my father, who managed an airport in China before fleeing to Hong Kong, decided he would like to try his hand at poultry farming – ducks, pigeons, chicken and turkey. The farm was right by the river and so it was convenient for us children to be engaged in fishing or exploring the nearby ponds. At the time I had no idea that my school friends in the city did not have such activities and more importantly such fun
……The farm was to be closed rather unexpectedly. There was nothing wrong with the running of it; and business was good. But “Bird Flu” struck and it struck bad, literally wiping out our whole stock. No farm along the river was spared. The sight of dead poultry was horrible. I do not know how they were cleared, but cleared they were, probably by the government.
Thus my father’s little entrepreneurial venture came to an abrupt end. I do not think he really ever recovered from that as he never went into another business venture and became very cautious……”

This is how it works:
36 industrial countries that signed the Kyoto Protocol agreed to reduce greenhouse gas emissions by financing “clean development” projects in the third world. So those companies who need them can offer to buy carbon credits (technically called Certified Emissions Reduction, or CER) from the likes of my father’s poultry farm, which say generates 3000 CERs per year @ €5 per CER, totally €15,000, until Kyoto expires in 2012. The farm owner then installs methane digesters. In doing so he generates electricity and can reduce his utility bill substantially by selling the surplus into the national grid. Also, he can still sell his poultry but now has a less smelly farm. But here is the fun bit. The one who pays €5 per CER can now sell the carbon credits say to a European Bank for €20. The bank might hold on to it as an investment as its price will most likely go up.

Of course the small farm owner only benefits in a small way. The ones who really benefit from the Kyoto Protocol and carbon trading are again the “big boys”.

So what has Enron got to do with all of this, you may ask.

Well, this is what I gleaned from the latest copy of Fortune Magazine:

“For two centuries rum, molasses, and sugar were bought and sold at London's West India shipping docks. Today the gleaming office complex that towers over the docks, Canary Wharf, is the global nerve center of carbon finance. Barclays, Citibank, Credit Suisse, HSBC, Lehman Brothers, and Morgan Stanley all have trading desks here, and so here is where you find a pair of investment bankers - both 35, both alumni of Enron, both brainy and self-assured - who have emerged as two of the world's top carbon traders.

Louis Redshaw of Barclays Capital and Imtiaz Ahmad of Morgan Stanley (MS, Fortune 500) have risen above the crowd for several reasons. First, they were early movers: Redshaw started the desk at Barclays in 2004, before EU trading began, and Ahmad traded emissions credits for BHP Billiton, the giant mining company, before joining Morgan Stanley in 2005. Second, their banks have relationships with utilities and industrials whose emissions are regulated by the EU. Third, they can navigate a market that is opaque and highly regulated, and offer insight into where prices are going.”

In the meantime I read that a new technology called “coal gasification” provides a way to generate clean electricity with coal, which is plentiful. The gasification plant is cheaper to run, and it makes it easier to capture the carbon dioxide and inject it into a geological reservoir (sequestration), or even an oil well to help push the oil out of the wells. Oil produced from underground coal in this manner can cost as little as $55 per barrel compared to the OPEC oil price of $120. The only trouble is that if there is a big scale move to do that, OPEC will reduce the price to below $55.

South Africa during the sanction years managed to produce oil from coal, thank you very much. 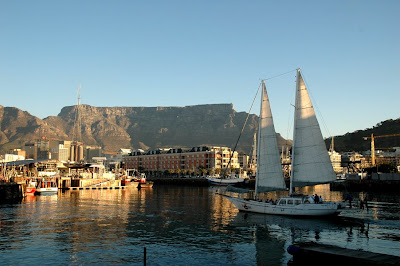 “SECUNDA, South Africa -- Every day, conveyor belts haul about 120,000 metric tons of coal into an industrial complex here two hours east of Johannesburg.
The facility -- resembling a nuclear power plant, with concrete silos looming over nearby potato farms -- superheats the coal to more than 2,000 degrees Fahrenheit. It adds steam and oxygen, cranks up the pressure, and pushes the coal through a series of chemical reactions.

Then it spits out something extraordinary: 160,000 barrels of oil a day.”

The other benefits are that sulphur and mercury will not be released into the environment and we may one day be able to eat tuna and other seafood without mercury contamination and of course reduction of acid rain that destroys forests.

Unless we the people understand the science and of course the politics, we cannot win.

One thing is for sure: oil will run out; and it is time we support good clean alternatives.

Email ThisBlogThis!Share to TwitterShare to FacebookShare to Pinterest
Labels: 6 Cockroach