Fish “shepherding” in the Virgin Islands

My passion for snorkelling and underwater photography is well known among my friends. (Dr Am Ang Zhang’s early snorkeling experience was described in The Cockroach Catcher.) I have been asked often if I use a Nikonos to take my underwater pictures.

Alas, no. By the time I had a great deal of opportunity to take underwater pictures, digital had arrived on the scene and with it a number of well made underwater camera housings that were able to do the job nicely. 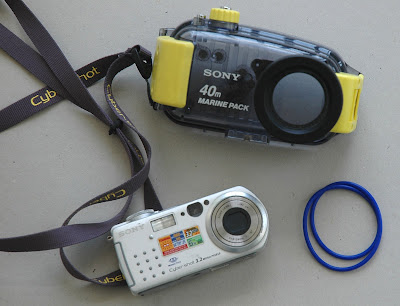 Care must be taken to ensure that the blue O-ring is absolutely clean and greased by the grease provided. A clean finger will do the job better than anything else.

It may not be widely recognised that the Nikonos camera is based on a prototype designed by Jacques-Yves Cousteau and Jean de Wouters in 1963. Their "Calypso-Phot" was subsequently licensed by Nikon. Many Nikonos users are now reluctantly switching over to digital because of immediate accessibility and easy colour correction with most softwares such as Photoshop.

Water filters out a good deal of the low frequency side of the colour spectrum, giving in the raw a very bluish green picture. With Photoshop, the simplest trick is to just use Auto Colour Correction, which turns the picture into a vibrantly coloured one.

Of course the more advanced photographer might wish to create his own colour mask to achieve a more controllable result, especially if he needs to use a sequence for a slide show. Auto Correct may not give a consistent enough colour for such purpose.

In Tortola (BVI) we encountered a few big tarpons (overwhelming in size of over four feet in length but pretty harmless unless provoked like after a long fight with an angler).


A couple of them were seen circling some small white fish, millions of them, as if they were “shepherding” them. Each tarpon was also seen with a few bodyguard-like fishes, which swam with the tarpon around its belly, way beyond the reaches of its mouth. 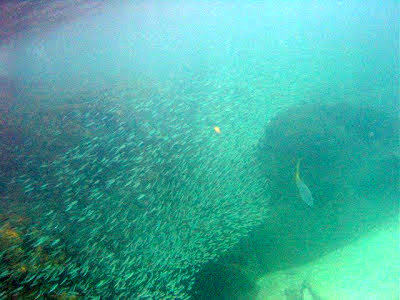 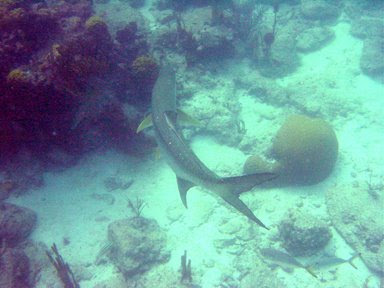 In Peter Island (BVI) I was able to have a close-up view of a six foot barracuda. This also appeared to be rounding up lots of white fish, but I was not sure if the barracuda was “shepherding” them. There was a reasonable distance between them and the giant barracuda. I spotted the fish and its entourage at a distance, but all of a sudden, it appeared right in front of me. 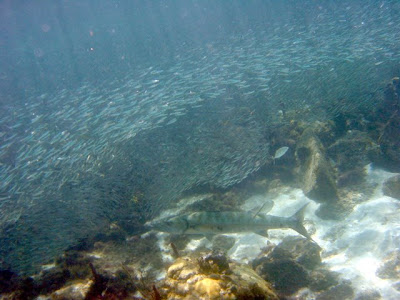 As I was snapping away with my underwater camera, it suddenly shot up straight into the air, plunged back into the water and disappeared. It was indeed a most memorable sight. Luckily I was not wearing anything bright like a ring or a chain, which would have attracted the barracuda’s attention.

The Virgin Gorda (BVI) snorkeling experience was equally unforgettable. The peculiar rock formation was stunning and provided shelter to make one feel safe to skin dive. The lights coming through the rocks and water was just mesmerizing. 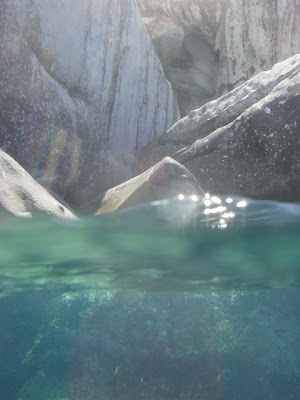 St John of the USVI is a different story. Being a National Park, and one of the largest underwater national park in the world, it is very organised. The beach is pristine, the water crystal clear, and there is a labelled underwater trail for snorkellers. 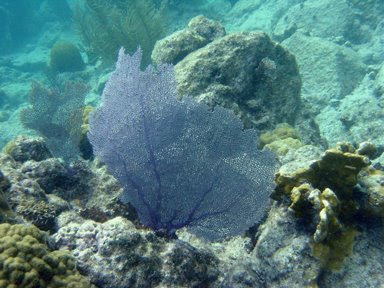 When we were there, there were still plenty of soft corals which unfortunately were fast disappearing from other Caribbean Islands. Some people did not like it for being too organised. It was for me a great experience as the facilities were excellent.