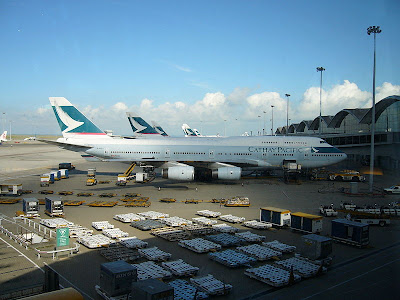 Hong Kong's main airline, Cathay Pacific, on Saturday backed down on its refusal to allow its flight attendants to wear face masks to protect themselves against swine flu. The change of policy came after the confirmation of East Asia's first swine-flu case in Hong Kong on Friday night and an appeal from the city's health secretary, York Chow. AFP/Standard

It is claimed that there is no evidence that the wearing of face mask is useful. So I tried to search for the evidence.

"Face masks offer the best protection in the fight against SARS, reveals a new hospital-based study from Hong Kong. 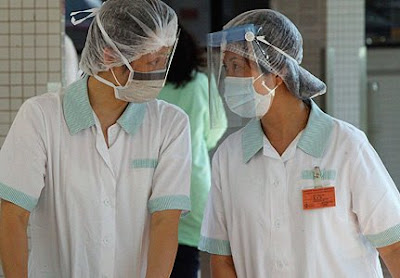 "Wearing a mask can give a person dealing with SARS patients in hospital up to 13 times more protection compared with not wearing one, says Wing Hong Seto, study lead and chief microbiologist at the Queen Mary Hospital in Hong Kong.

"However only surgical masks and N95 masks - designed to block airborne particles - will work. These masks protect the face from droplets coughed out by infected people, which the team believes is the primary mode of spread. Seto says droplets are probably the main mode of transmission of SARS outside hospitals as well. He says the findings confirmed SARS is not spread through the air - if so only the N95 masks would have been protective.

"Face masks have become a morbid symbol of the impact of SARS in the worst-hit parts of the world. The virus has now killed 416 people across the globe, with over 6000 infections in 29 countries.

"Wearing masks in public places has become commonplace in the Hong Kong and the Chinese mainland, where the disease first emerged. But their effectiveness has been controversial and some commentators say their use has helped stoke an atmosphere of panic.

"But Seto told New Scientist: "Masks seem essential for protection. This finding fits well with droplet transmission, because droplets are generated at the face level."

"Seto and colleagues from five Hong Kong hospitals and the University of Hong Kong, surveyed over 250 hospital staff exposed to 11 SARS patients between 15 March and 24 March.

"Most of the 13 staff who became infected did wash their hands, and a handful also wore gloves or a paper mask, but none had used a surgical or N95 mask. Analysis of the data showed that the use of surgical or N95 masks was the only measure to give statistically significant protection.

"Paper masks offered little protection, says Seto. 'Such masks, being easily wet with saliva, are never recommended as a precaution against droplets.'

"However, not one of the 69 staff who had used all four recommended protection measures - wearing a mask, gloves, gowns and washing their hands - contracted the virus."

"Seto believes the risk of contracting SARS in public places is 'very low' and so does not wear a mask himself. 'However, I have it ready if I am in a crowded place,' he says. 'I see someone consistently coughing, then I put it on. If I see he is febrile, I strongly advise him to go home and see a doctor. Then I wash my hands and take a good shower on coming home.'

It has to be accepted that there is virtually no rubbish collecting facility in public places in the UK due to worries about bombs and there are no hand washing facilities on buses and other public transports. See NHS Direct Advert.
In any case, Hong Kong has now a second case of of Influenza A (H1N1); a passenger on Cathay Pacific flying in from the US. There has been no local spread so far.

I think the government just did not want to supply the masks. The most dangerous places are the public transport system because of overcrowding and if you sneesze the whole coach will get it. I like the way HK reacted.