As WHO raised the alert form phase 4 to 5, just one short of the highest alert, it may be useful to look at the history of Influenza Pandemics and similar Pandemic Scares in recent times.

1976: Swine Flu Scare
When a novel virus was first identified at Fort Dix, it was labeled the "killer flu." Experts were extremely concerned because the virus was thought to be related to the Spanish flu virus of 1918. The concern that a major pandemic could sweep across the world led to a mass vaccination campaign in the United States. In fact, the virus--later named "swine flu"--never moved outside the Fort Dix area. Research on the virus later showed that if it had spread, it would probably have been much less deadly than the Spanish flu.

What is important about this scare was the CDC's reaction to it.

With the blessing of President Ford a vaccine was produced and used as advised by the CDC. The outbreak failed to turn into a pandemic - and the vaccine program turned into a major disaster. The shot was linked to 500 cases of Guillain-Barre syndrome, including at least 25 related deaths, while the swine flu killed only one of the 230 soldiers it sickened. The manufacturer were wise enough to get the government to agree to indemnify them against any claims of adverse reactions from the vaccine.

Perhaps the mask is not such a bad idea. It was effective during the
Hong Kong SARS Epidemic. It raises public awareness if not anything else as they tried to do in Mexico. 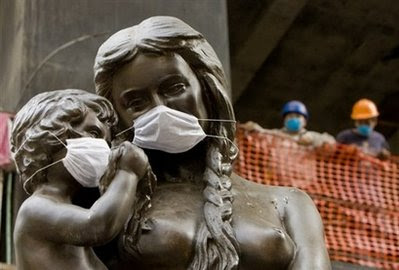 The Spanish Influenza pandemic is the catastrophe against which all modern pandemics are measured. It is estimated that approximately 20 to 40 percent of the worldwide population became ill and that over 20 million people died.
One of the most unusual aspects of the Spanish flu was its ability to kill young adults. The reasons for this remain uncertain. With the Spanish flu, mortality rates were high among healthy adults as well as the usual high-risk groups. The attack rate and mortality was highest among adults 20 to 50 years old. The severity of that virus has not been seen again.

In February 1957, the Asian influenza pandemic was first identified in the Far East. Immunity to this strain was rare in people less than 65 years of age, and a pandemic was predicted. In preparation, vaccine production began in late May 1957, and health officials increased surveillance for flu outbreaks.
Unlike the virus that caused the 1918 pandemic, the 1957 pandemic virus was quickly identified, due to advances in scientific technology. Vaccine was available in limited supply by August 1957. Most influenza-and pneumonia-related deaths occurred between September 1957 and March 1958. The elderly had the highest rates of death.
By December 1957, the worst seemed to be over. However, during January and February 1958, there was another wave of illness among the elderly.

In Hong Kong, an urban myth that went round was the usefulness of mustard green, carrots and parsley and raw green olives and most markets could not keep up the supply.

In early 1968, the Hong Kong influenza pandemic was first detected in Hong Kong. Deaths from this virus peaked in December 1968 and January 1969. Those over the age of 65 were most likely to die. The same virus returned in 1970 and 1972. The number of deaths between September 1968 and March 1969 for this pandemic was 33,800, making it the mildest pandemic in the 20th century.
Earlier infections by the Asian flu virus might have provided some immunity against the Hong Kong flu virus that may have helped to reduce the severity of illness during the Hong Kong pandemic. Second, instead of peaking in September or October, like pandemic influenza had in the previous two pandemics, this pandemic did not gain momentum until near the school holidays in December. Since children were at home and did not infect one another at school, the rate of influenza illness among schoolchildren and their families declined. Third, improved medical care and antibiotics that are more effective for secondary bacterial infections were available for those who became ill.

In May 1977, influenza A/H1N1 viruses isolated in northern China, spread rapidly, and caused epidemic disease in children and young adults (<>

The most recent pandemic "scares" occurred in 1997 and 1999. In 1997, at least a few hundred people became infected with the avian A/H5N1 flu virus in Hong Kong and 18 people were hospitalized. Six of the hospitalized persons died.