From The Cockroach Catcher

“……During Chinese festivals there was always much sharing of food, and that was traditional style Teochiu food that I have come to miss……”
Teochiu is the ancestral home of the Cockroach Catcher. Outside China, Teochiu cuisine may not be as well known as Cantonese, Shanghai, or Peking cuisine. However it is no less tasty. I am of course totally biased. To celebrate New Year Day, my wife made Teochiu Braised Goose.
Recently I met a Teochiu friend who happens to be a master cook of traditional regional dishes and he kindly cooked for me this one, which certainly brought back sweet memories. 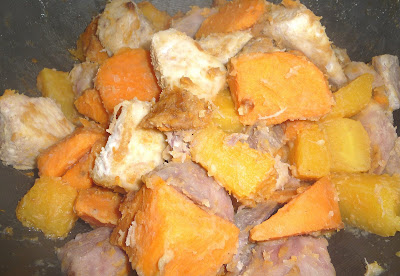 
In many countries now you can get taro, pumpkin and sweet potato. It may be confusing as in some places taro is called yam and in others sweet potato is known as yam, and so I have avoided that name altogether.

It is a simple enough dish. Cut up the two different root vegetables and the pumpkin into chunky cubes (inch to inch and a half). Fry them in a wok with your oil or fat of choice. For authenticity that should really be goose fat. The biggest secret is the use of chopped spring onion and a light sprinkling of sugar. If you are watching the sugar you can skip that, I suppose. A little water may have to be added depending on the heat you use. The dish is ready when the vegetables are cooked and caramelized. 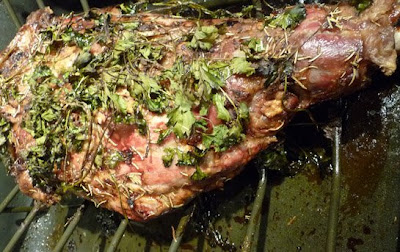 ©2009 Am Ang Zhang
This dish goes really well with cilantro crusted barbecue leg of lamb. You will find the cilantro a refreshing change from the traditional rosemary and more delicate. This fresh herb is used widely in Teochiu cooking but the cilantro barbecue lamb is a Cockroach Catcher invention. To prepare the leg of lamb for barbeque, first rub with salt, and then insert six to eight whole garlic cloves into the meat after making pockets at random intervals with a sharp pointed knife. The paste for the crust is a simple enough affair. Just mix your favourite mustard with pepper and cilantro. Then spread the paste all over the joint. Preheat the kettle barbeque (or barbeque with lid). For a five pound leg, barbecue (indirect heat of at least 450°F) for about two hours for rare, and add another half hour for medium rare. Do not put the joint directly over the charcoal (preferred by the Cockroach Catcher) or gas source. 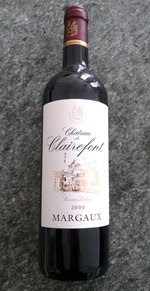 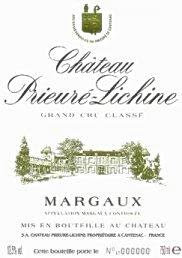 For a wine to accompany the lamb, my choice right now happens to be: a second wine of Château Prieuré Lichine (4th Growth), Château de Clairefont 2005. The vineyard is located next to Château Brane-Cantenac and Château Palmer. It is a great value wine and is ready to drink now whereas the first wine still needs some bottle years. The vineyard was bought by Alexis Lichine in 1951 for £8000, and sold in 1999 by his son for a handsome sum of $28.5 million. Granted there were additions to the original vineyard, but it was a good story.

What about greens, you might ask. Chinese broccoli briskly braised in good home made chicken stock will do the trick.

Chinese New Year and the Goose

Grand Rounds: Six Until Me a well known diabetes blog by Kerri