Learning From History: SARS, Canada, Masks and Inluenza A (H1N1)

In The Globe and Mail, Canada Link:  ttps://www.theglobeandmail.com/life/sars-how-the-quest-for-a-quick-victory-led-to-costly-error/article22394326/

“Faced with the World Health Organization's costly declaration on April 23, that Toronto was too dangerous to visit, politicians, health officials and even the news media quickly banded together against a common enemy — and it was not the virus but WHO, the United Nations agency, that had effectively put Canada's largest city under quarantine. ‘That week, that advisory definitely changed our psychology and the way we looked at this outbreak, ’Dr. Low said. ‘I remember . . . we were putting such a positive spin on things, including myself — everybody wanted to be clean of this.’”

"Now Toronto is holding its collective breath through a crucial weekend once again, as health officials cling to hopes of containment even as the numbers of cases and people in quarantine climb. The WHO lifted its travel advisory on April 30. Two weeks later, after the agency removed Toronto from its list of SARS-affected areas, Ontario lifted the provincial emergency status. Behind the scenes, the province disbanded members of its epidemiology team and scaled back its emergency-operations centre to a routine monitoring function. With no known new cases after 20 days, the city had laid down its gloves. On May 16, health staff in area hospitals were instructed that they no longer needed to wear full protective gear. May 16 is emblazoned with regret in Dr. Low's mind: "As soon as the masks and the gloves came off, you can see this dramatic spike in the cases.”

“……There was a new cluster, they told him, centering on patients who had spent time at St. John's Rehabilitation Centre in the city's north end before being transferred to four other Toronto area hospitals. Contact tracing had turned up no epidemiological link to the first outbreak. But a lab test confirmed that one of the four known patients carried the SARS coronavirus deep in his bronchial tract. It was back.”


You really cannot spin the public’s health, or can you? However there was some other form of spinning.
“Dr. Low's head spun with disbelief. ‘You're hearing it all and you're trying to minimize it. You're thinking, No this can't be right, this can't be.'

I know that Influenza A(H1N1) is not SARS, but why should we not learn from it.

The evidence of masks is here. CDC on SARS. 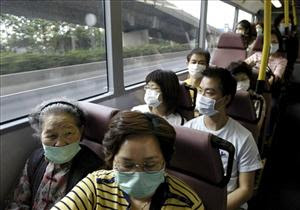 Bus in Hong Kong AFP
In the meantime we are donning masks whatever anyone else may say.


The Book: The Cockroach Catcher

I visiteda doctor in HK recently and I was handed a mask to wear. I agree that it is a good idea as when you sneeze, you may not be quick enough to get a tissue. The clinic also provided alcohol gel. No wonder HK is not getting the increase in number of cases like the US or UK.