I first came across Quinoa in and was amazed by the beauty of the crop. 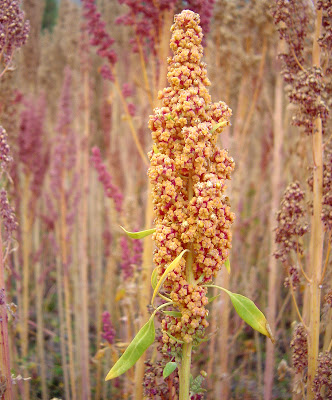 “… Quinoa (KEEN-wah) is a powerful supergrain that's been used in for 5,000 years. A good source of protein, it's a great choice for vegetarian main dishes….” said the Houston Chronicle. (A recipe for stuffed red peppers with quinoa, provolone and walnuts was also included.)

The Incas must have known as they had strong warriors.

Quinoa is said to be almost perfect as a grain. It has all the essential minerals and amino acids (including lysine, which is deficient in most grain crops) that are required for a balanced human diet.


Be sure to include it in your diet or get the shares of the companies that market it. Quinoa can be used to replace rice or couscous and there are loads of recipes around, e.g. quinoa, tomato and broccoli salad, quinoa and lentils salad, quinoa pilaf, quinoa salad with raspberry vinaigrette.