The Telegraph
Cockroaches could help combat MRSA and E.coli
By Michael Howie
4 Sep 2010 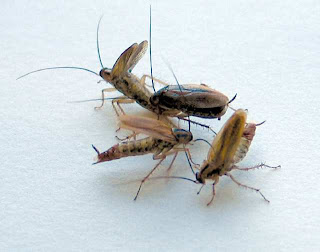 Cockroach (and locust) brains could kill MRSA, E. coli and other bacteria (Science)
Scientists at Nottingham University found that the insects, which are widely reviled for their dirty image, could actually be more of a health benefit than a health risk.
They have identified up to nine different molecules in the tissues of cockroaches and locusts that are toxic to bacteria and they hope will pave the way for new treatments for multi-drug resistant bacterial infections.
The tissues of the brain and nervous system of the insects were able to kill more than 90% of MRSA and E.coli bacteria, without harming human cells.
Simon Lee, a postgraduate researcher who is presenting his work at the Society for General Microbiology’s autumn meeting in Nottingham, said: “We hope that these molecules could eventually be developed into treatments for E. coli and MRSA infections that are increasingly resistant to current drugs.
SGM: Autumn 2010 Meeting: Nottingham University
The brain lysates of locusts and cockroaches exhibit potent broad spectrum antibacterial activity
Simon Lee, Ian Duce, Helen Atkins & Naveed Ahmed Khan

I still think they (cockroaches) are gross little bugs. Built a site to help people kill them http://online-couture.com

Thanks for the visit.