Australian farmers having just recovered from one of the longest period of drought in recent memory are bracing themselves for another ecological effect of the return of the rainfall: locusts.
The drought caused a decline in the number of birds and other insects that normally feed on baby locusts. The rain also provided ideal breeding condition for locusts.
September being spring in is when the locusts hatch and there are clear indications that the locusts will swarm. 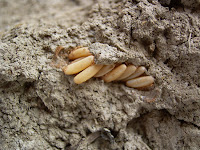 Currently spraying with pesticides is the only means of control and they are not without problems.


“Some pesticides in use today are especially dangerous to wildlife. Two insecticides, carbofuran and diazinon, were involved in 55% of all bird incidents."

Earlier in 2009, scientists discovered that serotonin is the neurotransmitter that initiated the swarming behaviour in locusts:

Serotonin Makes Locusts Swarm
Martin Enserink on 29 January 2009
Serotonin, the brain chemical involved in depression, anger, and a variety of other human behaviors, turns out to have another surprising role: It transforms desert locusts from solitary, innocuous bugs into swarming, voracious pests that can ravage orchards and fields in a matter of hours. The findings, published in tomorrow's issue of Science, could point the way to new locust-control methods that don't rely on insecticides.

Tom Fayle /National Geographic
Most of the time, the desert locust (Schistocerca gregaria) is a bland, greenish insect that lives an inconspicuous life, shunning other members of its species and flying only by night. But when their densities reach a certain threshold, locusts become gregarious: They seek out one another's company, start reproducing explosively, and eventually form massive swarms that can move thousands of kilometers beyond their usual habitats and create havoc of biblical proportions.

It’s very excellent information and more real facts to provided that post.Thank you for sharing this information. Pest Control in Ilford