Dark Side: Mother threw own baby in fire!

That was not another major Social Services blunder.

That was at the Metropolitan Opera on Sept. 25th 2015.
Verdi’s Il Trovatore is probably well known to most for its Anvil Chorus. For me it is about The Dark Side, the dark side of human nature.

The Dark Side:
“My hunch is that despite media coverage many of us still fail to grasp the dark side – the dark side of human nature. Until we do, we shall continue to read about child abuse, abductions and murders of the worst kind.”From The Cockroach Catcher.

Doctor suspended for blowing the whistle:

Dr Kim Holt was suspended from .

SOMEONE took a decision at the famous     (GOSH), in , to suspend a senior pediatrician, Dr Kim Holt, from her post.

We know why the good doctor was suspended on full pay.

These are the facts: Dr Holt, a specialist of 25 years  experience, started working in Haringey in a children’s department run by GOSH
in 2004.

Two years later she started writing to her superiors complaining about the loss of staff, and the risk of a possible “disaster” at the child protection service in Haringey if more doctors were not attached to the department. This was a matter of “public interest” and should be “investigated”, argued Dr Holt.

As readers will know, such a “disaster” occurred when a locum pediatrician was called in to see Baby P and made a mess of her examination. Two days after the examination Baby P died.

Was Dr Kim Holt patted on the back for her whistle-blowing?
No, someone, or a committee at GOSH, felt offended by Dr Holt’s interference – and suspended her.

Dark Side of The Opera:
In Il Trovatore, Azucena is the mother who killed her own baby and Manrico was brought up by her. Manrico is the brother of Count Di Luna that burnt Azucena’s mother for being a witch. Azucena had to avenge her mother’s death. How much hate can you hold. She had to throw her own child in the fire, bring up Manrico so that he would one day be killed by his own brother! Unbelievable! The full synopsis here.

Well, that roughly is it, Verdi’s Il Trovatore  and the dark side. One of Verdi's best! 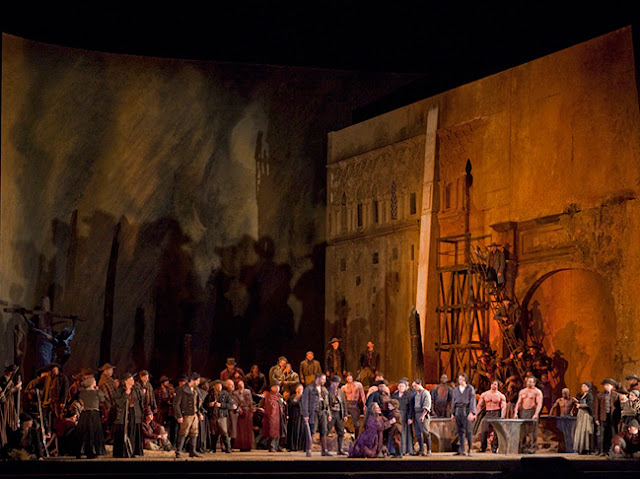 Most people were looking forward to seeing the Russian superstars take the stage for very different reasons. One hand there was Anna Netrebko, singing her first Leonora at the Met, a character that she has dominated in . And on the other side of the bracket was the return of baritone Dmitri Hvorostovsky to the stage after months of battling a brain tumor. Safe to say that both stars were at very high levels, delivering nuanced and deeply poignant performances.

Email ThisBlogThis!Share to TwitterShare to FacebookShare to Pinterest
Labels: Opera.