Batter my heart, three-person'd God ; for you
As yet but knock ; breathe, shine, and seek to mend ;
That I may rise, and stand, o'erthrow me, and bend
Your force, to break, blow, burn, and make me new.
I, like an usurp'd town, to another due,
Labour to admit you, but O, to no end.
Reason, your viceroy in me, me should defend,
But is captived, and proves weak or untrue.
Yet dearly I love you, and would be loved fain,
But am betroth'd unto your enemy ;
Divorce me, untie, or break that knot again,
Take me to you, imprison me, for I,
Except you enthrall me, never shall be free,
Nor ever chaste, except you ravish me. 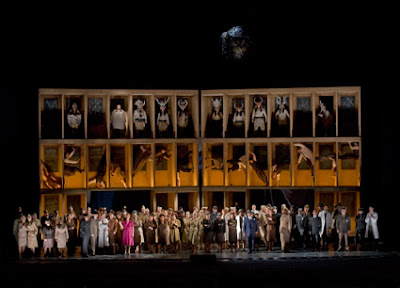 At the end of Act 1 of Dr Atomic (premiere at the Metropolitan Opera House, New York this season - composer: John Adams), Oppenheimer, the father of the Atomic bomb, faces his own personal crisis alone in the desert, recalling this sonnet by John Donne. 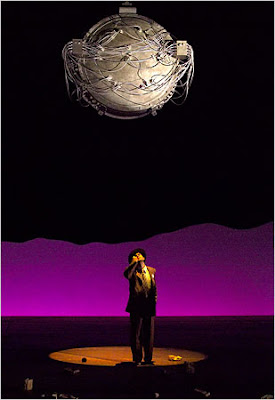 Gerald Finley as J. Robert Oppenheimer in "Doctor Atomic." Terrence McCarthy
This opera was first performed in San Francisco in 2005. You can read about that here.

The Cockroach Catcher and his wife were at the Met’s performance on the 13th of November 2008, a review of which you can read here.

I am not here to discuss the rights and wrongs of the Atomic bomb and its derivatives. There are now 50,000 such weapons worldwide. What is clear is that it has always been humans who hold the key to mass destruction. In Nanking. the Japanese grew bamboo through living Chinese as a means of destruction. It did not take an Einstein to work that one out nor an Oppenheimer to execute it.

In Dr Atomic, at the high point of the final countdown to the test firing of the bomb, there was a tape recorded voice of a Japanese woman repeatedly asking for a glass of water.

5:29:45 am Mountain War Time on July 16, 1945 Los Alamos National Laboratory
What would the effect have been if images of Japanese atrocities in Nanking or in Hong Kong were projected on stage at the same time? Or perhaps Pearl Harbour, for an American audience?
After all there have been recent attempts by Japan to change their history textbooks. Guilt must in the end find its proper home.

That I may rise, and stand, o'erthrow me, and bend
Your force, to break, blow, burn, and make me new.

I totally agree with you that we need to be more balanced. Let us not forget the right from wrong.

Thanks u r information

Share great information about your blog , Blog really helpful for us . We read your blog , share most useful information in blog . Thanks for share your blog here . Speech Therapy Doctors in Malviya Nagar

Excellent article you have shared with us. Thank you so much for sharing this information. If you are looking for a best doctor for your health then you don't need to look here and there. Dr. Sachin Gupta is the best knee and hip replacement surgeon in Jaipur with the years of experience in robotic and computer assisted technique. For more about orthopedic doctor in jaipur and joint replacement surgeon in jaipur please visit our website.