“For centuries, the brutal and tyrannical reign of Qin Shihuangdi, First Emperor of China, was summed up by a four-character phrase, fenshukengru 焚書坑儒, ‘He burned the books and buried the Confucian scholars alive.’”Anthony Barbieri-Low: 21st Sammy Yukuan Lee Lecture. See also: The Independent. 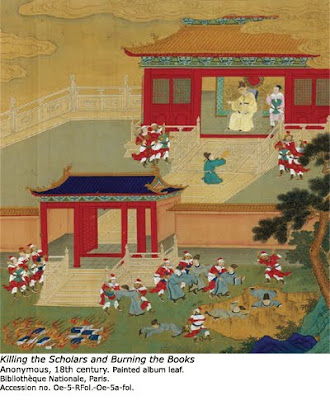 Forty years ago, Colin Douglas, geriatrician and novelist, when on a gap year in a remote secondary school in post-colonial Ghana, was summoned by the headmaster and informed that "we had in our library a book the government didn't think we should read." The book was of course Animal Farm. 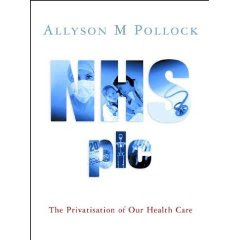 "Allyson Pollock describes her experience in November 2001 at the hands of the House of Commons Health Select Committee, then just refreshed by an influx of New Labour ultras, including one Julia Drown MP, a former health service manager. Against the advice of the committee's chairman and clerks, Ms Drown tabled a rant aimed at undermining Professor Pollock and her Health Policy and Health Services Research Unit at University College London. In the chairman's view such an attack on an individual witness was unprecedented and wrong, yet it nevertheless (by virtue of a nasty but neat little bit of committee footwork) appeared in the final report of an inquiry into the implications of the private finance initiative (PFI) for the NHS.”

Allyson Pollock must count herself lucky for not living in during the reign of The First Emperor although she did leave the part of The Kingdom.

“……if you are old enough, or even just curious enough, to wonder whatever happened to the British NHS as first conceived, you might find NHS plc a useful little book. An excellent early reputation—for cost effectiveness and equity based on integrated services, minimal management costs, and a vast and intensely practical pooling of risk—dwindled slowly. This was firstly because of chronic and insidious underfunding, later because a notional internal market began to take it apart, and finally (though the word may still be slightly premature) because of the current assault: a burgeoning, divisive, sometimes mendacious for-profit marketisation of a healthcare system that was once an admired public provision and a right of citizenship in the United Kingdom.”

Regarding PFI he continued:

"Since it was Pollock's views on the PFI that so upset its proponents, it is worth summarising them briefly. Costs are now intrinsically higher, because of capital borrowing at higher rates than those available to government, because of cash hungry consultancies and the vast transactional and monitoring costs of countless contracts, and because—for the first time on a large scale in the NHS—commercial profits must be made. To accommodate all these new costs clinical services have been scaled down, while matching assumptions about increased efficiency are only variably delivered. All this, along with the rigidity of a trust based strategy for building hospitals and the locking in effect of contracts fixed for decades, seems to Pollock and many others at best a bad bargain, at worst a naive betrayal that opens the NHS to piecemeal destruction and the eventual abandonment of its founding principles. And all over the country PFIs—greedy, noisy, alien cuckoos in the NHS nest—gobble up its finances and will do so for the next 30 years.”

"Foundation trusts (‘public benefit corporations’—what?) will further disrupt any attempts to build effective local health services, drive the balance of care in the wrong direction, and almost certainly get choosy about the patients they treat. All this will least benefit elderly patients, whose care as our population ages ought to be explicitly identified as the core commitment of our NHS. Will elderly people be surprised? I doubt it. Their long term care was totally abandoned by the NHS in long ago, and given the direction of current reforms any priority for their acute care would be astonishing. And meanwhile, under the Orwellian rubric of choice and diversity, all manner of dubious, expansionist corporate players, many from the , where these things are managed so much worse, are circling, scenting opportunities for private profit in a once great public service.”

I have to thank Dr. Grumble for pointing me to this site that has a write up too.

“When I was at Oxford taking PPE 20 years ago, my best friend was Simon Stevens, who went on to become Tony Blair's key health policy adviser. Back then, he was a socialist. Now, he is Chair of United Health Europe, one of the 's giant corporations profiteering from the break-up of the NHS, and angling to take over doctor's surgeries across the . That little timeline symbolises quite a lot about what has happened to the NHS.”

Why do we still have the great books of Confucious and other scholars? They have all been memorised by scholars and The First Emperor could not kill all of them. When he failed to achieve eternal life and died, the scholars just re-wrote these books again.

“Professor Pollock, with the help of many colleagues acknowledged in a list that reads like a roll of honour for services to the real and now threatened NHS, has written a brave, necessary book. And because you know the government thinks you shouldn't read it, you probably should.”