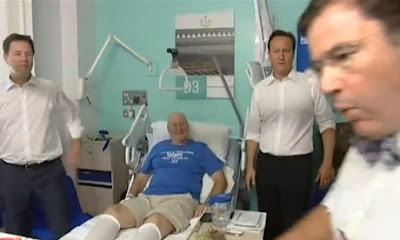 Surgeon David Nunn reprimanding the TV crew and officials who accompanied
David Cameron and Nick Clegg on their visit to Guy's on 14 June.
Photograph: guardian.co.uk


A bow-tied surgeon who interrupted a hospital visit by David Cameron and Nick Clegg last week has gone on leave, according to an NHS trust which issued instructions to staff to say nothing to the media.

David Nunn, who burst in as the prime minister and his deputy were talking to a patient at Guy's Hospital in London, has gone on indefinite leave.
Cameron and Clegg looked briefly startled as the surgeon marched into the ward on 14 June and said: "Sorry. Just a minute. Excuse me, I'm the senior orthopaedic surgeon in this department. Why is it that we're all told to walk around like this and these people ..."
All that training and now he is no longer of service to NHS patients. Our PM must be above that. What a waste!!!
To be fair, the camera crew did ask the ward sister if they needed to wash their hands and roll up their sleeves.

Really! Camera crew might need to touch the doors etc.

The ward sister may well have been too busy with all the management meetings and not kept up with the latest advances in medical sciences from out very own .

It is perhaps not her fault either but that of allowing non-doctors to decide on Hospital Infection policies without true evidence base.


The secret, explains Dr Williams is to unlock the mysterious process known as quorum sensing.

It was a term coined about 15 years ago in Nottingham by a late colleague of Dr Williams, and refers to the way bacterium, once thought of as individuals rather than a community of organisms, can communicate with one another and make a decision.
"As the bacteria begin to grow they produce low levels of a signal molecule.
"As that concentration of the molecule accumulates, it allows more and more cells to sense there are more bacteria present.

"When that reaches a critical threshold concentration then bang! The bacteria say: 'OK there is a enough of us here, we can really make a difference and cause some trouble'."

Professor James said: "The real doomsday scenario now is that you have an increasing number of young fit people with Community MRSA, you have a flu epidemic that makes the lungs more susceptible to infection and then the MRSA will actually kill people very quickly."

Meanwhile in :
Andrew Burd  Professor of plastic, reconstructive and aesthetic surgery at the of .   BMJ

“In we have personalized white coats; wear ties and long sleeved shirts and our unit has just received an award for achieving a zero tolerance for meticillin resistant Staphylococcus aureus (MRSA). My wife, who is Chinese, attributes the difference to the cultural attitudes towards cleanliness such that it is easier in to unite all staff, visitors and patients in anti-MRSA strategies. This derives from a greater societal awareness.

“In the West, where individuality has a stronger influence, compliance has to be achieved by control. But where will it all end? Will the comic farce of dress control continue to evolve such that staff wear less and less? One wonders what effect that will have on the pulse pressure in the orthopaedic wards for staff and patients alike!?”

Perhaps someone else should be on leave!!!