Some unusual flowers in Tasmania! 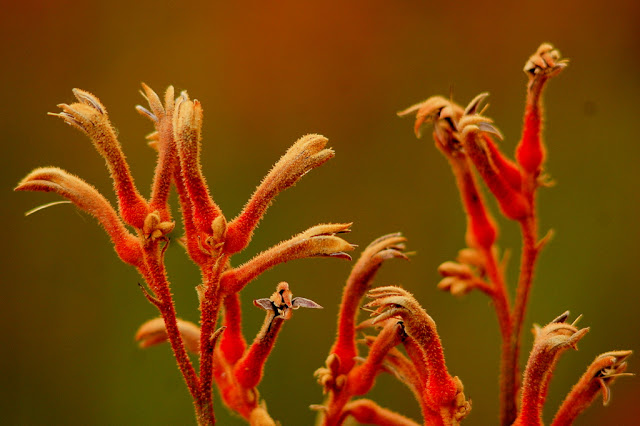 Reminds me of an unusual response:

Can wrong sometimes be right?
A question I had to face in my years of practice in
Child Psychiatry.

Dear Cockroach Catcher:
We are a bit stuck with this Autistic boy with unusual OCD symptoms.

The boy was born in the US of American mother and British father. Diagnosed Autistic Spectrum Disorder age 4 with OCD symptoms. Was sent to an institution at age 5 when parents separated and mother could not cope. Father managed to get him to England after 10 months. His obsessional symptoms got worse and amongst them the most difficult is that he can’t bear to wear any clothes which are not brand new. He checks the tag, feels the clothing and sniffs it to decide if he would wear it.

He is on Prozac 40mg, which has reduced the aggressive outbursts but not made any real inroads into the dressing problem……except that he has occasionally managed to wear used socks.

P.S. You can see we missed your innovative ideas!

Sorry, I have been in some far away places and did not quite reply early enough!

Nowhere else in medicine is “innovation” more appropriate than in Child Psychiatry!

My first thoughts were: Cheat!

Neither would be in NICE or any textbook.

Cheat: get father to keep all the clothes tags or write to companies to get a lot of them to tag on to his clothes so that they are like new.

That saves some money. Failing that steal the tags.

(I can't believe I said that)

Collusion: because he could sniff and tell that the re-tagged clothes are not new we may have to get him to agree to the ritual of tagging clothes and folding them nicely. One of my autistic patients turned our session into a TV session. So collusion is a better way.

It is a pity that nowadays we cannot spend enough time with these patients to understand them. If I may venture further and suggest that the boy perhaps associated new clothing to the new life with his father and he wanted to keep it that way. Obsessional symptoms are essentially a defence in psychodynamic terms and until the child (autistic or otherwise) can be sure of his place at his new home he is going to keep his defences.

So spend more time with him and you may well be surprised!

It is probably good he was not in an institution. That was what they nearly did to Temple Grandin. There is so much we can learn from her story. She too was nearly institutionalised. She famously created a cuddling machine for herself!

Wrong may sometimes be right.

He wrote to me after reading my book:
The Cockroach Catcher has evoked many images, memories, emotions from my own family circumstances and clinical experience.

My 80 year old Mum has a long-standing habit of collecting old newspaper and gossip magazines. Stacks of paper garbage filled every room of her apartment, which became a fire hazard. My siblings tricked her into a prolonged holiday, emptied the flat and refurbished the whole place ten years ago. ……My eldest son was very pretty as a child and experienced severe OCD symptoms, necessitating consultations with a psychiatrist at an age of 7 years. The doctor shocked us by advising an abrupt change of school or we would "lose" him, so he opined. He was described as being aloft and detached as a child. He seldom smiled after arrival of a younger brother. He was good at numbers and got a First in Maths from a top college later on. My wife and I always have the diagnosis of autism in the back of our mind. Fortunately, he developed good social skills and did well at his college. He is a good leader and co-ordinator at the workplace. We feel relieved now and the years of sacrifice (including me giving up private practice and my wife giving up a promising administrative career ) paid off.

Your pragmatic approach to problem solving and treatment plans is commendable in the era of micro-managed NHS and education system. I must admit that I learn a great deal about the running of NHS psychiatric services and the school system.

Objectively, a reader outside of the UK would find some chapters in the book intriguing because a lot of space was devoted to explaining the jargons (statementing, section, grammar schools) and the NHS administrative systems. Of course, your need to clarify the peculiar UK background of your clinical practice is understandable.

Your sensitivity and constant reference to the feelings, background and learning curves of your sub-ordinates and other members of the team are rare attributes of psychiatric bosses, whom I usually found lacking in affect! If more medical students have access to your book, I'm sure many more will choose psychiatry as a career. The Cockroach Catcher promotes the human side of clinical psychiatric practice in simple language that an outsider can appreciate. An extremely outstanding piece of work indeed.


Dr Temple Grandin has a unique ability to understand the animal mind - and she's convinced her skill is down to her autistic brain.

Temple believes she experiences life like an animal. Her emotions are much simpler than most people's and she feels constantly anxious. It's this struggle with overwhelming anxiety that led her to discover just how much she has in common with animals and, in particular, cows.

Using her ability to observe the world through an animal's eye, she has been able to make an enormous impact on animal welfare. Her greatest achievement has been in the area of slaughterhouses - she has fundamentally changed the way animals are held and slaughtered.

Today she's an associate professor of animal science, a best-selling author and the most famous autistic woman on the planet.

Dr. Grandin didn't talk until she was three and a half years old, communicating her frustration instead by screaming, peeping, and humming. In 1950, she was diagnosed with autism and her parents were told she should be institutionalized. She tells her story of "groping her way from the far side of darkness" in her book Emergence: Labeled Autistic, a book which stunned the world because, until its publication, most professionals and parents assumed that an autism diagnosis was virtually a death sentence to achievement or productivity in life.

The Cockroach Catcher
Review on Amazon

Email ThisBlogThis!Share to TwitterShare to FacebookShare to Pinterest
Labels: autism