To Ban Or Not To Ban: BPA 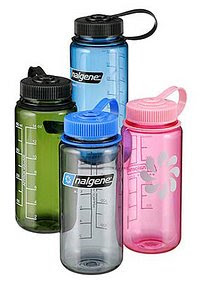 
In April the Canadian Government moved to ban BPA (Bisphenol A) in all baby bottles. A first step by any government to do so and now the first State in the US to do this might well be California as the LA Times reported:

"Californian lawmakers weigh ban on chemical found in baby bottles, although danger is in dispute."
Now the BPA coating is also used in canned food for sometime and there were concerns it might be implicated in prostate cancer especially for babies exposed to BPA (a long lead time, you might think). Perhaps having baby food with lids lined with BPA is not such a clever idea after all.

“Wal-Mart Stores Inc. and Toys ‘R’ Us Inc. say they will stop selling baby bottles made with the chemical next year, and the maker of the hard-plastic Nalgene water bottles announced in April that it would stop using the chemical."

At least 11 other states have considered bills to restrict it.

“California's bill was approved earlier this year by the state Senate and it is awaiting a vote by the Assembly. It's not yet clear whether Gov. Arnold Schwarzenegger will sign it if the Legislature sends it to him.”

In the latest twist the Associated Press reported:

“FDA scientists said the trace amounts of bisphenol A that leach out of food containers are not a threat to infants or adults."

It is interesting that the evidence is supplied by the industry:
"'It's ironic FDA would choose to ignore dozens of studies funded by NIH(the National Institutes of Health) — this country's best scientists — and instead rely on flawed studies from industry,' said Pete Myers, chief scientist for Environmental Health Sciences." AP continued.
I wonder if FDA's Acting Commissioner Andrew von Eschenbach will be following Daniel Troy, (a former chief counsel at the FDA, as Glaxo’s new general counsel as reported by the the WSJ) and move to American Chemistry Council?
Or will the Terminator ban BPA anyway? Lets wait and see.
Posted by Am Ang Zhang at 10:00 AM