A Brief History Of Time: Food and Medicine

In Chinese culture, food is important in the promotion of good health and much has been documented in Traditional Chinese Medicine textbooks. This knowledge, generated by several thousand years of experience by keen observers, does not sit nicely with modern science especially that of Western medical science. There are believers and non-believers especially. It would be foolish to fully endorse everything, and yet it would be even worse to reject all that it could bring.

On the other hand, in recent times, illegal mixing of western medicine into so called natural products has given such natural remedies a very bad name. The FDA has yet to deal with the large number of slimming preparations that contain modern slimming drugs.

Not all things natural are safe either, and even the ever so popular glucosamine has its problems.

There is so much that could be learned from experience, as shown by the hands only CPR which can be traced to China over two thousand years ago.

Many Chinese today believe in traditional ways: we know it works, we just may not yet know how it works.

There may of course be a more sinister explanation to all the mystique. Early rulers of China and some later ones realised that in order to govern you must not educate your people. So rituals and superstition were introduced instead to keep people from harming themselves. After all, people were needed to serve their rulers. Even today certain knowledge is not widely disseminated or shared, and worse still, the wrong knowledge is disseminated.

The Cockroach Catcher has a rule about any food product: if it claims to deal with all the most common illnesses, one should become suspicious. On my travels I often come across claims of natural substances that manage to deal with high cholesterol, high blood sugar, high blood pressure, and Alzheimer for good measure, all at the same time.

It was just a little over a year ago I started blogging after my book The Cockroach Catcher was published. I would like to indulge in a bit of nostalgia and quote you some passages from the book and a few of my favourite postings on Food and Medicine.

From The Cockroach Catcher:

“The garden was filled with the fragrance of the white tropical jasmines. That fragrance is only second to that of the Osmanthus (Gui Hua), the flowers of which are tiny and appear more towards winter. We used to collect the Osmanthus flowers, dry them and use them to flavour our best teas. Jasmine is more a late spring and summer flower and we had a big bush. By nightfall the cooling hill breeze brought with it occasional whiffs that made you want summer to last forever. It was a peculiar time for those of us who had lived in or around the university for the past five years. We left home as school children and now we were back, and with any luck the majority of us would in a few weeks become fully fledged doctors ready to apply our skills. We had changed and the rest of the family probably not as much; and yet it was a time to savour – the last of the old before embarking on the new and brave. It was good to be reminded of the fine cooking back home, of an older and more sedate time when shopping was done twice a day for fresh ingredients. This practice of course still continues in some parts of the world.”

One of the earlier postings was indeed a tribute to what the Cockroach Catcher’s mother taught him:

”The Cockroach Catcher however goes by what his mother taught him from an early age. In Chinese cuisine, soup is often seen as an important part of a meal. The process of slowly cooking various ingredients is part and partial of that of producing something that is nutritious, delicious and revitalizing. To save energy, we invested in a highly efficient ‘shuttle chef’, which is basically a double pot, consisting of a smaller inner pot and a larger outer insulating chamber. You first of all heat up the food in the smaller pot, and then seal it in its insulating outer chamber to let the cooking process continue in a slow fashion for a few hours or over-night. Another doctor friend of ours discovered that she could achieve the same slow cooking by putting an ordinary pot into a cool box!

"Imagine the disappointment when we first tried to make consommé with good quality meat and found an ever so slight rancidness setting in over-night. Something was not quite right. To solve this problem, we had to go back to basics. We tried adding one more traditional ingredient: gouqizi (derived from Lycium). Eureka! The presence of the antioxidant meant no more rancidness whatsoever. The French always knew and used red wine in their famous Boeuf Bourguignon and Coq au Vin.”

Chinese New Year and the Goose 9th February, 2008: Then the posting on goose drew some attention from Foodie blogs and my wife was invited to post the recipe on: World Foodie Guide 21st February, 2008: 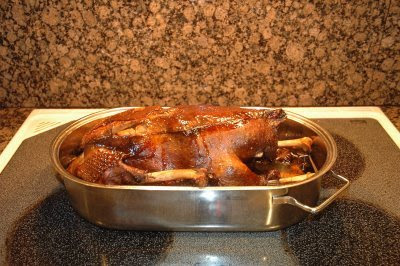 How To Make Chinese Teochiu Goose. Goose fat is the new ‘black’ and was sold out at Christmas time a couple of years back in England. 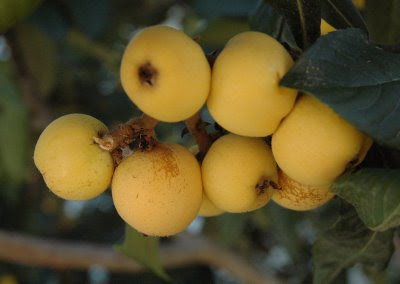 A good friend who read my book The Cockroach Catcher said she wished I had written a lot more about the village and I posted:

“As a result of modernization, in one generation we have seen the passing of something that provided us with a uniquely enchanting experience that no modern developments with their charming 'cool' shops can ever hope to match. Are we being over-romantic to ignore the hardship many of us put up with during that period, not to mention the struggles of many of our parents to provide for us? Have we forgotten the leaking roof, the rudimentary toilet facilities and our constant battle with cockroaches and other pests, not to mention poisonous snakes and the like? I have to say that on balance, it was still a sweet memory. Who can fail to remember the constant supply of fresh fruits and vegetables from our own land? The chickens we reared and their eggs poultry were just out of this world. I have conversed with a few friends and relatives about this, and they all seem to agree.”

You can read all about it here.


The Cockroach Catcher still marvels at some of the ancient remedies from a modern scientific standpoint as in: Ancient Remedy: Modern Outlook

Sometimes health claims rebound in a peculiar way and my posting on Ribena has turned out to be a great favourite with readers.

Finally, be wary of outrageous claims and take everything in moderation.

“Over time health benefits have been associated with red wine, olive oil, chocolate, almonds, pomegranate, blueberry, green tea and coffee. The Cockroach Catcher is skeptical of extreme claims, but for the record I do take all the items mentioned above, in moderation. It is indeed more important that you should enjoy what you eat and drink and not just what researchers tell you, and in moderation.”

Teratoma: One Patient One Disease?
A Brief History of Time: CPR (Cardiopulmonary Resuscitation)
House M.D. : 95% vs 5%
Picasso and Tradition