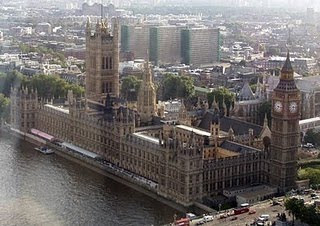 Houses of Parliament ©2010 Am Ang Zhang

"Londoners will also be outraged that the Tube upgrades promised to them are now threatened," said Johnson. The mayor claimed that Tube Lines's co-owners, Ferrovial, the Spanish owner of Heathrow airport, and Bechtel, the US project management specialist, will be paid £400m in management secondment fees by 2017.

Public private partnerships
Public private partnerships (PPPs) are arrangements typified by joint working between the public and private sector. In the broadest sense, PPPs can cover all types of collaboration across the interface between the public and private sectors to deliver policies, services and infrastructure. Where delivery of public services involves private sector investment in infrastructure, the most common form of PPP is the Private finance initiative
PFI
Private Finance Initiatives are intended to harness private funding for public building projects, such as schools and hospitals.
Under the schemes, introduced in the 1990s and expanded under Labour, private firms pay for work on buildings, then lease them back to local authorities on a contract of up to 25 years.
PFI: £23 Billion in 30 years

PFI: The Enron of the NHS

“PFI makes me particularly angry. It is a guaranteed loan to property investors, where high-rate mortgage payments are kept off-balance to reduce the country’s declared debt. In other words, it’s the Enron of the NHS. This is money the NHS has committed to leave frontline healthcare for the next 35 years.”
Dr Helena McKeown
Posted by Am Ang Zhang at 2:40 PM

Email ThisBlogThis!Share to TwitterShare to FacebookShare to Pinterest
Labels: 6 Cockroach