Habit of Art, or of Sex? The Rights & Wrongs 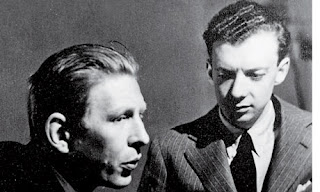 Auden and Britten, late 1930s.
Photograph: Britten-Pears Library
The First Emperor of China was worried about the influence of books on his subjects and he chose to burn them and bury those that wrote them.
We generally like to think that we live in a more tolerant society and yet we cannot pretend that books or writings do not exert great influence. It is only natural that the more famous you are the more influential you become. Can fame become an excuse to blur the boundary between right and wrong?
I will not pretend to know the answer but a recent play at the National got me thinking.
Could being as famous as W.H. Auden give him the right to urinate into his sink at Christ Church, Oxford?  We know pop stars trash hotel rooms regularly.
The greater shock followed: he mistook a BBC journalist to be his rent boy. Rent boy at Christ Church!   People seem to be horrified by the sexual behaviours of Presidents and Prime Ministers.   Is it any different with the cultural elite?
Can Britten’s interest in boys detract from some of the greatest music by an English composer, or is it so important to reassure us that his interests were never overtly sexual?             Britten’s Children: The Telegraph
The Play: The Habit of Art by Alan Bennett 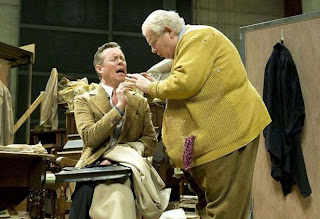 The Habit of Art by Alan Bennett, directed by Nicholas Hytner.
With Richard Griffiths as Fitz (W H Auden), Alex Jennings as Henry (Benjamin Britten)
Photo: Geraint Lewis/The Independent
It was one of the most thought provoking plays I have seen for a while and perhaps because of his fame, The New Statesman had this to say:
“This is so nearly Bennett's coming-out play that one wonders if an opportunity has been missed or a catastrophe avoided. Perhaps he knew that if he really argued what he hints at in The History Boys and now in The Habit of Art - namely that older men having sex with teenage boys is not necessarily wrong - he would be stripped of his listing as part of the national heritage quicker than you could say Daily Mail.”
The Times
The Guardian
The Independent
Love’s a little boy