The RSC predicted the demise of the NHS when they last performed the Winter's Tale. The Cockroach Catcher was there!

Yet there  is so much we can learn from Shakespeare! The King offended Apollo and his heir was dead!!


The Winter's Tale at the RSC, Stratford-Upon-Avon. 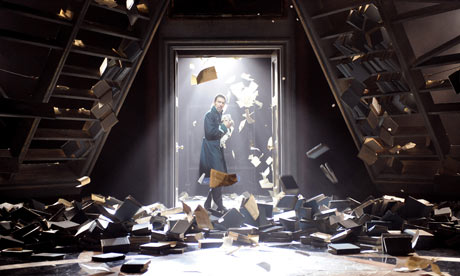 Servant
O sir, I shall be hated to report it!
The prince your son, with mere conceit and fear
Of the queen's speed, is gone.
LEONTES
How! gone!
Servant
Is dead.
LEONTES
Apollo's angry; and the heavens themselves
Do strike at my injustice.

(Act 3, Scene II). The Winter’s Tale.
.........Apollo chose to kill King Leontes' heir brought him to his senses but by then it was all too late. As he left the stage the two giant bookcases that we barely noticed started to collapse towards the middle of the stage with all the “books” falling onto different parts of the stage. It was real and scary. Civilisation must indeed be coming to an end!

Our party was sitting by the stage and so we all tried to pick up some of the torn pages: WOW!

All the books were indeed hard cover bound Hansards. (Hansard: The Official Report of the proceedings of the main Chamber of the House of Commons, United Kingdom.) How topical. One page was Hansard 1950 with questions on the new NHS. We duly put the pages back on stage for re-reuse.
Most if not all reviewers missed this powerful metaphor. 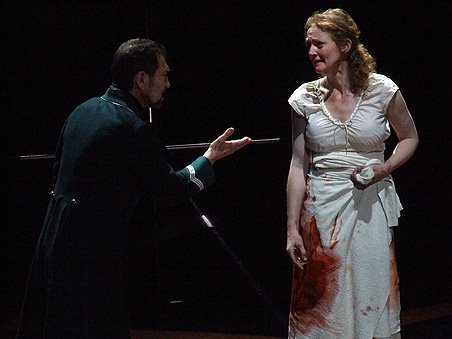 Despite the hard work by a few bloggers, most of the NHS reform are in place one way or another and some say that to kill it now would mean that there will be none of the old NHS left anyway.

Modern day government way ignore the public and even Parliament. If the NHS is dismantled long before any legislation, how can one save it.

In my work I have seen great injustice of parents wrongly accused of abuse and children removed from them. After eventually proving themselves the courts decided that it would be too disruptive to return the children to them.
Looks like the same tactic is being used in this the biggest shake up of the NHS.

The NHS have many faults and most of them due to government policies. Mid Saff. happened because of central policy.

The government's mistakes started with GPs and OOH, then MTSA and now the reform that will totally dismantle this great institution. The government did not know that they had the specialists on the cheap for years and like the cheap OOH care from GPs, they are giving it up.

But why should they care, private health insurance will take care of that.

Please do not forget, many will not cover dialysis or intensive care. So be careful Prime Minister when you eat in Germany as it will not be any good catching one of those E. Coli food poisoning.

The NHS does its best to deal with the consequences but it is the politicians who have to frame society and its response in terms law and policy who have failed. Who pays for the elderly mentally frail, who makes the laws to change our diets and lifestyle? They have no idea what to do to make us thin and care for us humanely and cost effectively as we get older.

Demanding headroom and cuts to NHS budgets as an excuse to deal with problems politicians are too timid to address is not the answer.

Shoving the NHS into the arms of the private sector will not solve the problem it simply passes the buck.

The editorial prompted a discussion on Radio Four’s Today programme, featuring Dr Godlee and a Dr Charles Alessi. Dr Godlee remained firmly un-updated. Dr Alessi, on the other hand, appeared either to have tuned in or plugged in, for he was fully updated.

As well he might be, as Chair of the National Association of Primary Care, a pro-reform outfit not only aligned with the equally pro-reform NHS Alliance, but also partnered with a lugubrious assembly of drug companies, management stooges and American connected vultures hovering in the hope of rich NHS pickings.

How one would save money by allowing private providers to take profits from us is beyond my comprehension and a few other bloggers.

Personally, there is too much vested interest by a few GPs and Hospital Consultants in the reform as they are going to make a lot of money out of this.

So would private providers. Many hospitals are in prime sites for property development. Billions to be made by someone.

England will again return to its old class system, those with and those without: Private Insurance.


Abandon the NHS internal market:
“……So the internal market has failed because it does not consider the health of the nation as a whole, merely the finances of a single hospital department, a local hospital or GP practice…….”

Here is the advice:

“……Let us go back to the old discipline of the NHS. Let the professionals manage medicine, empower the professionals, the doctors and nurses and shove the internal market in the bin and screw down the lid…….”
More>>>>

PFI: The Enron of the NHS

“PFI makes me particularly angry. It is a guaranteed loan to property investors, where high-rate mortgage payments are kept off-balance to reduce the country’s declared debt. In other words, it’s the Enron of the NHS. This is money the NHS has committed to leave frontline healthcare for the next 35 years.”
Dr Helena McKeown

Abandon Business Model/Bonus Culture:
If we are not careful, the NHS will move towards the same model of NHS Trusts and PCTs with highly paid CEOs and their management staff. Below them a number of highly dispensable doctors, nurses and other workers. Firing of staff is the norm to balance the books in the NHS.

Look at what happened to Out Of Hours service and hospital weekend and holiday manpower levels and you will know what I am talking about.

Unfortunately, it may be too late to try and bring back the good will that has kept the OLD NHS going for so many years. The good will that was slowly destroyed by modern management ways and silly Pavlovian bonus culture.

Cassius:
"The fault, dear Brutus, is not in our stars,