Rulers of the world are confidently doing what they like! Could it be that Apollo has taken early retirement or has Apollo appeared in some different guise?

These are questions I asked myself after my recent visit to the Courtyard Theatre for a performance of The Winter's Tale at the RSC, Stratford-Upon-Avon.

I overheard some guide telling a group of tourists that in Shakespeare’s days, in order to please everybody, animal blood and entrails were used as props. At least we were spared of entrails and I was sure that Hermione’s blood stained post-partum garment was not of animal origin. 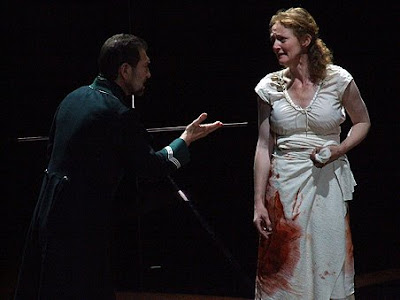 Hermione's blood stained post partum garment
RSC Website.
The audience loved the bear-a paper puppet of enormous proportions thus sparing Antigonus actual bodily harm on stage and so no blood or entrails here. In the play he was of course devoured by the bear, in the act of preventing the King’s attempted infanticide.

Rough justice indeed! Or was it Shakespeare’s insight and warning to those of us daring to disobey.

Apollo chose to kill King Leontes' heir brought him to his senses but by then it was all too late. As he left the stage the two giant bookcases that we barely noticed started to collapse towards the middle of the stage with all the “books” falling onto different parts of the stage. It was real and scary. Civilisation must indeed be coming to an end! 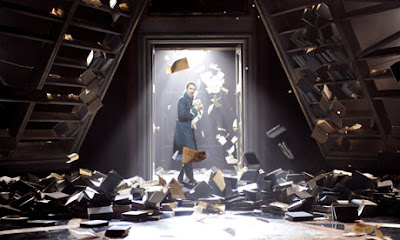 Tristram Kenton Guardian
Our party was sitting by the stage and so we all tried to pick up some of the torn pages: WOW!

All the books were indeed hard cover bound Hansards. (Hansard: The Official Report of the proceedings of the main Chamber of the House of Commons, United Kingdom.) How topical. One page was Hansard 1950 with questions on the new NHS. We duly put the pages back on stage for re-reuse.
Most if not all reviewers missed this powerful metaphor.

More powerful than blood and entrails.

I never notice the Hansards. Thanks cc.