Royal Opera House: 4th June, 2009 Lulu.
The Cockroach Catcher was there so was his daughter and musical friends in some other parts of the House. The Cockroach Catcher’s wife went with a friend to the War Horse and without question she had a more enjoyable experience.

This much anticipated Royal Opera House Lulu was perhaps too hyped for its own good. 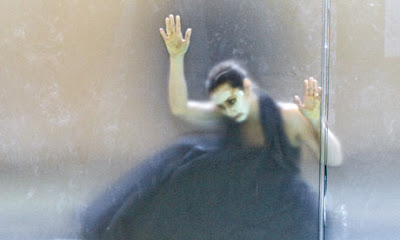 It was like a funeral scene with everybody in black. Well most of the time! But then some of the men are more suited to The Mafia version of Rigoletto.

Yes, there was baring of the body, not of Lulu or her lesbian lover, but of a man as wide as he is deep and I was worried at some point that he might really require CPR.

Lulu, I thought was about abuse and the aftermath of it, the worst of human behaviour was on stage: murder, suicide, infidelity of all kinds, incest and sexual abuse, prostitution and serial murder.

But why was this Lulu not sensual? Is there such a cultural difference in matters of sexual preferences? Here Lulu’s most attractive wear were her shoes! I tried hard to imagine her as a prostitute but had to admit that I totally failed when she turned up in her black dungaree!

It was a pity as the ROH orchestra was fantastic in one of Opera’s more difficult scores.

Agneta Eichenholz never quite lived up to the hype except she was no fat lady. Was she a survivor or a victim? She was certainly detached making it difficult for anyone to be engaged or enraged. She preferred Mozart.

Do not go if this is your first opera experience and do not pay more than four pounds either.

“Was that you booing?” My daughter’s friend swore he could hear her voice. It was.

Mine too! One must boo for the sake of other good operas.

The E.N.O. Lulu was fantastic. I booed too.