Michael Lewis wrote a book called “Liar’s Poker” twenty years ago. It was at the time an eye opener for me and I enjoyed it tremendously.

Lewis thought he was writing a furious anti-money book and hoped that those that read it would avoid Wall Street. Instead he inspired many to join the amoral world of finance and many even wrote to thank him.

I remember one of his quotes in Liar’s Poker:

I saw his new book The Big Short when I was on holiday recently and decided to have a look. 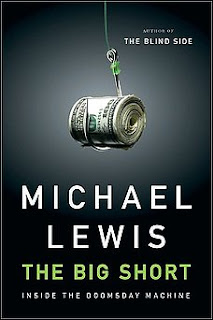 Two things I noticed, there was something about a bank from where I grew up and there was a Doctor with Asperger’s Syndrome that made over $700 million from the recent Wall Street meltdown.  Vanity Fair

It proved to be as good a read as Liar’s Poker and in many ways better.

What's so delightful about Lewis's writing is how deftly he explains and demystifies how things really work on Wall Street, even while creating a compelling narrative and introducing us to a cast of fascinating, all-too-human characters.

A few things I picked out from the book The Big Short.

"Wall Street is able to delude itself because it's paid to delude itself. I mean one of the lessons of this story is that people see what they're incentivized to see. If you pay someone not to see the truth, they will not see the truth. And, Wall Street organized itself so people were paid to see something other than the truth. And that's one of the central messages of this story. You have to be very careful how you incentivize people, 'cause they will respond to the incentives."

The big Wall Street firms, seemingly so shrewd and self-interested, had somehow become the dumb money. The people who ran them did not understand their own businesses, and their regulators obviously knew even less. Charlie and Jamie had always sort of assumed that there was some grown-up in charge of the financial system whom they had never met; now, they saw there was not.

On Greenspan:
Steve Eisman (well known for his rudeness) on Greenspan: "I feel sorry for him because he’s a guy who is really smart who was basically wrong about everything."

On Goldman Sachs and AIG
Wall Street's most influential investment bank convinced the financial products division of insurance giant AIG insurance to join the party, a decision that would destroy the company.

"They insured tens of billions of dollars of subprime mortgage loans without even knowing they were doing it," Lewis said. "Goldman Sachs persuaded them to insure these piles of loans without them ever investigating what was in the pile. So, there's an additional level of incompetence. They didn't even know the mistake they were making."
"Goldman essentially took the worst stuff that they couldn't sell. They repackaged it and took it to Moody's. And got Moody's to rate it AAA?" Lewis was asked. "How did they know that Moody's was gonna rate it AAA?"
"Yes. They had helped design the models I'm sure that Moody's used to rate the bonds. And I've spoken with people at Morgan Stanley and Goldman Sachs who said, 'We helped the ratings agencies understand these things,'" Lewis said.

On Morgan Stanley
"I mean, there's a wonderful little vignette in the 'Big Short' about the leading bond trade, subprime mortgage bond trader at Morgan Stanley, a fellow named Howie Hubler, who manages to lose somewhere between, it's hard to know, but seven and $12 billion in a matter of six or eight months, more than any single trader has ever lost in the history of Wall Street, and no one knows his name," Lewis said.
Asked what happened to Hubler, Lewis said, "He's allowed to resign from Morgan Stanley and he takes with him tens of millions of dollars in back pay; it was all hushed up, basically."

On Household
The year was now 2002. There were no public subprime lending companies left in America. There was, however, an ancient consumer lending giant called Household Finance Corporation. Created in the 1870s, it had long been a leader in the field. Eisman understood the company well, he thought, until he realized that he didn’t. In early 2002 he got his hands on Household’s new sales document offering home equity loans. The company’s CEO, Bill Aldinger, had grown Household even as his competitors went bankrupt. …….The borrower was told he had an “effective interest rate of 7 percent” when he was in fact paying something like 12.5 percent. “It was blatant fraud,” said Eisman. “They were tricking their customers.”

It didn’t take long for Eisman to find complaints from borrowers who had figured out what had just happened to them. …….Hundreds of people in and around Bellingham had picked up the newspaper to discover that their 7 percent mortgage was in fact a 12.5 percent mortgage.

He was incredulous to learn that the attorney general had investigated Household and then been prevented, by a state judge, from releasing the results of his investigation. Eisman obtained a copy; its contents confirmed his worst suspicions. “I would say to the guy in the attorney general’s office, ‘Why aren’t you arresting people?’ He’d say, ‘They’re a powerful company. If they’re gone, who would make subprime loans in the state of Washington?’ I said, ‘Believe me, there will be a train full of people coming to lend money.’”

The following year it sold itself, and its giant portfolio of subprime loans, for $15.5 billion to the British financial conglomerate the HSBC Group.

Eisman was genuinely shocked. “It never entered my mind that this could possibly happen,” he said. “This wasn’t just another company
—this was the biggest company by far making subprime loans. And it was engaged in just blatant fraud…….Instead they sold the company and the CEO made a hundred million dollars.

So I decided to Google the events around Household International.

Independent
The former executive chairman, Sir John Bond, who led the purchase of the Household lending business and is now chairman of Vodafone, took home £2m in salary and bonuses for just five months' work in 2006 but also received £6.6m of free shares linked to past performance.

Guardian:
Many of HSBC's current woes can be pinned on Sir John Bond, below, the bank's former chairman who in 2005 completed a £24bn spending spree with the £9bn purchase of US consumer finance firm Household International.

Bond hailed Household as a fitting swansong when he left the bank a few months later to chair Vodafone, where he remains. But many shareholders were upset by the £22m payout he sanctioned to the US lender's boss, and the multimillion-pound bonus he sanctioned for himself and other directors.

“The board of HSBC has finally accepted that its catastrophic investment in Household International, not long ago described by the chief executive as a ‘dream portfolio,’ is worthless,” the U.S. fund manager said. “The investment has now been fully written off and the business is being shut down.”

"All" of the people who made these terrible decisions left with a lot of money. "I didn't run across a single character who didn't get rich. Anybody above a certain level in all these firms made huge sums of money by any standard.

What is scary is a similar class action settlement of UnitedHealth:

Bloomberg:
January 15, 2009
UnitedHealth Group Inc., the biggest U.S. health insurer, said it will spend $400 million to settle allegations it has manipulated payments to doctors and patients for the last 15 years.

I can only quote the book again:

FREE FREE FREE
I would like to convince readers that the NHS is worth saving so for a limited time I am offering an electronic version free to any medical blogger, nurses and doctors that worked in the NHS and other health care systems totally free. Please drop me a note to my email address <cockroachcatcher (at) gmail (dot) com >or through COMMENTS.
Posted by Am Ang Zhang at 8:16 PM

I am very impressed with this list! Thank you. It's really going to help me out.

You made some good points .I did a little research on the topic and found that most people agree with your blog. Thanks. blackjackshortreview