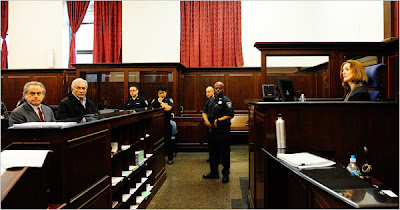 Emmanuel Dunand/Agence France-Presse — Getty Images
Talks on resolving the European debt crisis have been plunged into disarray after the head of the International Monetary Fund, Dominique Strauss-Kahn, was arrested and charged with sexually assaulting and attempting to rape a maid in a New York hotel.
Strauss-Kahn, 62, was taken from the first class cabin of a Paris-bound Air France flight at JFK airport by plainclothes officers before Manhattan police formally arrested him on charges of a criminal sexual act, attempted rape and unlawful imprisonment.
IMF paid for that, I suspect.
On Sunday night Anne Mansouret, a socialist regional councillor, alleged on French state TV that her daughter, the novelist Tristane Banon, had been the victim of an attempted sex attack by Strauss-Kahn in 2002 but had not gone to police. Mansouret claimed Strauss-Kahn had "a kind of addiction, a difficulty in controlling his impulses, which is a problem". She claimed his "preying" on women was a kind of "violence".
Judge Denies Bail to I.M.F. Chief in Sexual Assault Case
England: Thank goodness! No such news about David Cameron or Andrew Lansley.
David Laws: The Guardian
Laws was suspended from the Commons for seven days after the standards commissioner, John Lyon, ruled that over seven years he had deceived the authorities by submitting claims to pay a landlord with whom he was in a relationship and sharing a home.
The deception was serious and the sums involved substantial, Lyon said. Laws has already paid back nearly £60,000 and had to apologise to the Commons.
Lyon accepted what Laws has always claimed: that he broke the rules to protect his privacy and prevent people from finding out that he was in a gay relationship, rather than to profit, and that the way he claimed reduced the cost to the taxpayer.
We should all be grateful!!!
Chris Huhne: The Guardian
The Liberal Democrat hierarchy has defended Chris Huhne after a tape recording emerged in which the energy secretary allegedly pressed a witness not to discuss claims he had tried to avoid a driving ban.
Aides to the deputy prime minister, Nick Clegg, said they believed nothing new had surfaced to change the energy secretary's status since Vicky Pryce, from whom Huhne separated last year, made the initial claims 10 days ago. However, the local police force said it was deciding whether or not to investigate.
Looks like Wagner is worth listening to again.
The Ring: Child Psychiatry & Human Behaviour
Germany: Bayreuth, The Ruling Class & Wagner
Ruling Class: Scandal Ridden Government
Posted by Am Ang Zhang at 5:21 PM