NHS & The Mayo Model: What if!

“The best interest of the patient is the only interest to be considered.” These words
not only resonate with anyone who has ever worked, trained or been educated at Mayo Clinic but also with medical professionals around the world who emulate Mayo’s Model of Care.
The Cockroach Catcher surprised even himself that he was still naive about the future of the NHS that he joined over 40 years ago.
Elsewhere, I stated:
Private Health Care providers all knew the value of specialist. These specialists have been known as hospital consultants in (and the rest of the ). Private Health Care providers know that secondary care is where the money is. Primary care has never featured in Health Insurance schemes. It has always been secondary care.
The only reason why they now want to move into GP service is to have control over secondary care. Many Insurers have full control over the consultants and the hospitals they are allowed to operate.
Why are hospitals and the consultants not kicking up a fuss?
Here is a view:
“In the case of the consultants, a show was made of trying to make them accept much closer supervision by hospital managers, and cut back on their private work. But it soon came to seem that the real aim of doing this was to make them feel more disenchanted with working as salaried NHS employees and readier to go into business – to form doctors chambers, on the model of barristers, or other kinds of business, and sell their services to any employer, public or private, that offered them the best terms. A significant number began to plan to do so and some have begun to. And as the cuts begin to bite there will be unemployment among hospital doctors. As you will have read, consultants are among those scheduled to be laid off by hospital in Tooting, and elsewhere. Working for private providers will become normal again in a way it hasn’t been since 1948.”
The Plot Against the NHS
It is of course likely that after plotters plotted for nearly 20 years to have the money making part of the NHS privatized, they are unlikely to give up quietly.
Democracy is a peculiar business and there is truth that some of us know who the enemies of the people really were.
Some politician may regret too late for not taking the opportunity and grasp the three hairs on the god of opportunity. The Cockroach Catcher did spell it out not many weeks ago.
That many of the plotters in the Labour camp are now unashamedly working for private health care insurer or provider in one form or another that they did not get the votes from the PEOPLE.
There is a view that the truth of what David Cameron planned to do to the NHS was hidden from the electorate.
If that is so it would not make any difference if Andrew Lansley is replaced.
But: What if!
What if his personal experience meant that he will now do a Coca Cola and be the one PM that saved the NHS using the Mayo Model! 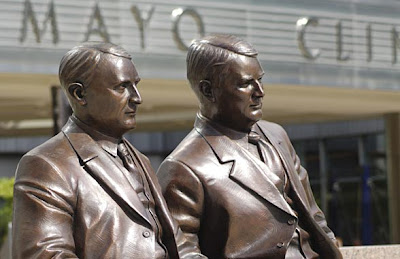 Dr. Charles H. Mayo and Dr. William J. Mayo
“…….Mayo offers proof that when a like-minded group of doctors practice medicine to the very best of their ability—without worrying about the revenues they are bringing in for the hospital, the fees they are accumulating for themselves, or even whether the patient can pay—patients satisfaction is higher, physicians are happier, and the medical bills are lower.”
As Doctor William Mayo explained in 1905: “The best interest of the patient is the only interest to be considered, and in order that the sick may have the benefit of advancing knowledge, union of forces is necessary…it has become necessary to develop medicine as a cooperative science.”
Mayo Clinic: Health Care is not a Commodity!!!
The book: The Plot Against the NHS
Related:
David Cameron & Coca Cola: Clever! Clever! Clever!
Instinct & Politics: Coca-Cola & NHS
NHS-Kaiser Permanente: Summary Posts
David Cameron & The NHS: Abandon! Abandon! Abandon!
NHS-Kaiser Permanente: The Good Bits!!!
Posted by Am Ang Zhang at 10:31 PM