As the NHS reform bill faced a delay of six months thanks to Nick Clegg, it looks like the privateers will have to wait a while longer.

Will the NHS really be privatised?

This is not the view of The Cockroach Catcher. 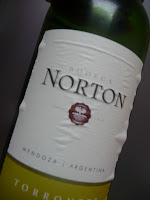 As he dined with his good friend who served a beautifully fresh Red Mullet cooked the Chinese style with a simple spring onion sauce, the Cockroach Catcher produced a bottle of his recent discovery: Torrontes from Argentina.
Torrontes is truly an Argentinian wine that is really suitable for our Chinese Style of cooking. On the nose, it has a delicate pear and citrus flavour. My friend who is used to the good and expensive wines took a sip and declared that it has a wonderful peach flavour. It has a long aftertaste that is unusual for this class of wine. At the price, it beats any other white wine. Let us keep that as a secret.

Over tea afterwards the topic of NHS privatization came up.

No, not all of NHS will be privatized.


Government money is the best money for anyone to make and that is really tax payer’s money. The new NHS will be the private sector’s main source of income, as only 90,000 in the UK are covered by private insurance and often they are offered cash incentives to use the NHS.

It is therefore essential for the private health care companies that the NHS is around, at least in name, so that they can make money by providing a “better value and more competitive” service to the NHS!

Some parts of the NHS will have to remain too, as it is necessary for the private sector to dump the un-profitable patients: the chronic and the long term mentally ill, for example. (Right now, 25% of NHS psychiatric patients are treated by the private sector.  But why? Even in psychiatry, there are cherries to be picked.)

Finally, in order to keep the mortality figures low at competing private hospitals, they need to be able to rush some of their patients off to NHS hospitals at the critical moments! 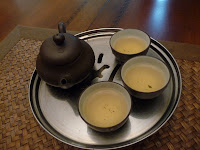 Have some more tea!!!

Iron Goddess of Mercy (Oolong Tea ): traditional tea  of my friend's home village, Teochiu which is of course where my family is from.

These are traditional tiny cups and the tea is lovely on the nose and has a long aftertaste. To do this tea justice, use the softest water you can get: like those for a good malt!!! (Calcium is the villain here: no more than 12mg/Litre)

So the NHS will be free at the point of delivery.

Lets hope so but the money must come from somewhere.

So nobody in their right mind would want to privatise the NHS. There is certainly more money to be made if it remained in the public domain.

Dave Cameron’s brother-in-law should not worry either as his income would go up at least 300% as long as he works for one of the private providers.

But the sums are somehow wrong!

If the private providers are making money and the GP commissioning teams have a limited pot and that Consultants working for the likes of BMI hospitals have a 300% increase in pay compared to old NHS Hospital pay scale, either tax payers are going to be forking out more and more money or someone is not going to get their treatment.

Is some politician heading for a top job with the likes of GHG or Bupa? Only time will tell and history told us it won’t be long: less than 2 years.


The Cockroach Catcher and Pompano


Chinese New Year and the Goose


The Cockroach Catcher and Pompano

I can vouch for the wine. Let us keep it a secret.

Yes, I agree, "There is certainly more money to be made if it remained in the public domain." If the care of the un-profitable patients, as you mentioned, such as the chronic and the long term mentally ill, is dumped, then society will suffer as a whole, as these concerns have to be addressed.