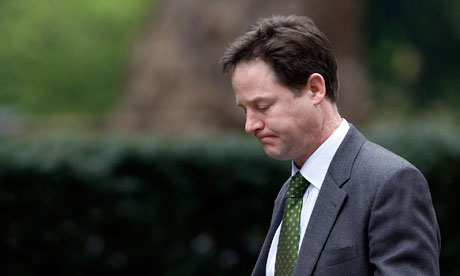 The deputy prime minister's party is expecting him to ensure modifications were made to the health bill. Guardian.
Photograph: Stefan Wermuth/Reuters
Why Israel of all places?
Israel has an electoral system based on nation-wide proportional representation.
The result is that the minority can hold enormous power as is the case with the ultra-orthodox Jews.
BBC 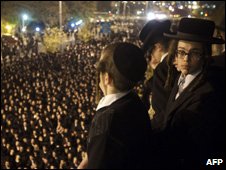 Often the most vocal campaigners on these issues are ultra-orthodox Jews, who are estimated to make up about 8% of Israel's Jewish population.
They adhere to strict interpretations of Jewish law on issues such as keeping the Sabbath, segregation between men and women in public places, modest dress and kosher food.
There is growing resentment among secular Israelis over the fact that the majority of ultra-orthodox Jews don't work, but are essentially subsidised by the state to study the Bible.
They are also exempt from military service, although some do choose to serve.
Jewish religious parties, particularly the ultra-orthodox party Shas, wield hefty political power in the Israeli political system, where they often end up as kingmakers in multi-party coalitions.
Pulse
Jobbing Doctor: Over to you, Nick
Nick has a problem. It is the fact that his ministerial portfolio and privileges are completely at odds with the fact that his party has decided, this weekend of all times, and in Sheffield of all places, that they cannot support the new NHS white paper. The rank-and-file of the party are pretty definite about their view: They are against.
What to do, what to do?

Nick needs to decide whether to follow the mandate from his party, or vote for the bill: He has already supported the bill during its second reading in the House of Commons, he and all the front bench team members from the Liberal Democrats. Now his party is telling him not to.
………..The essential decision is, does Nick stick to his principles and scupper the NHS bill, possibly the coalition, and trigger an election? Or does he support the Government, try for some cosmetic changes to the bill and argue that he is better affecting policy from within?

I am not clever enough to be able to read the government's real agenda, and I am sure the government hopes that most of us are even more stupid than me. But I have been tipped off to look out for affordability expert Paul Kirby, new head of policy development at No 10, and author of a paper called Payment for Success. Mr Kirby believes in promoting the "disciplined freedoms enjoyed by the private and voluntary sectors in real markets, where organisations are financially disciplined by the need to earn their living from paying customers by beating the competition". His argument seems to imply that contracts will be awarded to "any willing provider" on a cost basis, surely a dangerous notion – we wouldn't hire a builder to fix our roof on that basis, let alone a doctor to fix our heart disease, or a nurse to tend our dying mother.
I think we would all cling to the NHS, that brilliant and beautiful construction that has meant so much to my generation.
The Guardian:
Nick Clegg set to rein in NHS reforms
Lansley's reforms to the NHS – handing over a majority of the healthcare budget to GPs for commissioning, and scrapping primary care trusts – have been opposed by some Conservative MPs and the British Medical Association, and 10 days ago Lib Dems voted at their spring party conference to ensure modifications were made to the bill. Then it was suggested that even though the Lib Dems had registered their discontent, there was little their leader would be able to do within government.
You may, you may not know! But you hold the power like the ultra-orthodox Jews in Israel.
Be the party that save the NHS. The country will be forever grateful.
You are the only person that could. No one else!

FREE eBook:
NHS: The Way We Were! Free!

Oh Please God that he does speak up! But will he? If he does and trigger an election - I know which Party I will vote for!

But does he like the power he holds now... so much that he will continue to be a Yes man and conveniently forget the principles of which he held so dear?

C'mon Nick - do the right thing!

I have added another para from Margaret Drabble. It is so touching.

No, the NHS is not perfect, but let us work on it.