Boris Godunov, not the other Boris!
In 12 years time, would someone return the NHS to the original Nye Bevan version?
The Cockroach Catcher and his wife attended the Metropolitan Opera’s performance of Modest Mussorgsky’s Boris Godunov. 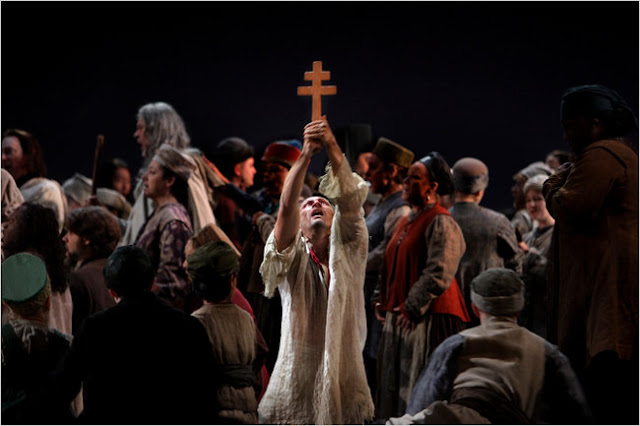 Sara Krulwich/The New York Times
Nikolai Rimsky-Korsakov said, "I both adore and abhor Boris Godunov. I adore it for its originality, power, boldness, distinctiveness, and beauty; I abhor it for its lack of polish, the roughness of its harmonies, and, in some places, the sheer awkwardness of the music." So he wrote a revised version which basically dominated the musical world for the next 75 years!       Wikipedia.
75 years!
New York Times:
The Met is presenting “Boris Godunov” in its heavily revised version from 1872, though incorporating music from the original 1869 score, notably the entire scene outside the Cathedral of St. Basil, where starving peasants argue over whether the murdered Czarevich Dimitry might in fact be alive. Mr. Gergiev conducts the score as Mussorgsky orchestrated it. Though long considered ineffective and sometimes crude, Mussorgsky’s original scorings have been steadily replacing the alternative orchestrations that were once common.
Hearing the colours and textures that Mr. Gergiev drew from the great Met orchestra, it was hard to imagine why Mussorgsky’s work was questioned. Sometimes the scoring is curiously thin, but the sparseness actually enhances the tragedy of the opera and complements the vocal setting of the text, which often follows the natural flow and speech patterns of the Russian words.
Who knows: Nye Bevan’s original version of the NHS may still be the best. There is much the government can learn from Boris.
Other Music Posts:
The Ring: Child Psychiatry & Human Behaviour


Berlin Wall, Appassionata & The Lives Of Others
Posted by Am Ang Zhang at 4:47 PM