A film review! This one won the Academy Award! 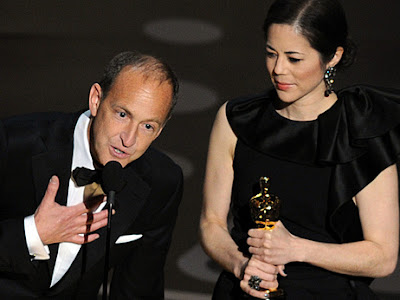 It was interesting flying back from the US as you get to watch some films you never would have watched in the cinema.
I somehow stumbled upon “Inside Job”. The introduction was of Iceland. No, they did not cause the volcanic eruption and the film was not about that. It was about the financial disaster.

Iceland “de-regulated the banking system” believing that they too being one of the most stable, wealthy, healthy, educated and honest country in the world must be modernised.

As long as they have "good" regulators, everything would be fine.

When a regulator visits a bank, he would find 19 big SUVs parked outside and he would be confronted by 19 top lawyers arguing that whatever the banks were doing were legal. They generally won their argument.

On the rare occasion when they meet a tough regulator they would simply employ him or her in true John Grisham style.

Before the crises, a third of the regulators moved over to work for the banks.

You should see the film as this was only the introduction. It gets worse no I mean better!


A glaring case of this can be seen when, as the collapse gathered speed, Oddsson, as Central Bank Governor, moved to peg the krona at close to the pre-crisis rate, a crazy move by all economic counts, but it might have allowed cronies in-the-know to spirit their krona into safer currencies in the few hours that the rate lasted. He consulted only his protégé, Haarde. Even the Central Bank's chief economist was kept in the dark.

I arrived on Saturday and what did I find on Sunday:

A Tojan Horse. No, not a virus on my computer but who knows what else there might be given what I have been writing recently!

Why David Cameron's plans for the NHS are dangerous

Tory MP and practising GP Sarah Wollaston has set out why she wants her own party to drop plans for a radical reorganisation of the National Health Service.

“It is not Greeks that could destroy the NHS, but if Monitor, the new economic regulator, is filled with competition economists with a zeal for imposing competition at every opportunity, then the NHS could be changed beyond recognition.

It is no use "liberating" the NHS from top down political control only to shackle it to an unelected economic regulator.”

I did try to hint at this in my recent blogs but this Tory MP is very brave.

She was right! My hunch was that all the PCT accountants would collect their redundancy money and then work for Monitor as it needs an army of accountants. Neat!

Did the regulators work in Iceland?

I do not need to answer that but the rest of the film is about the US and soon you do realise who runs the country and probably the world.

And who pays for what they cause: Tax payers.

Where do you think 30% of our regulators will be working in a few years' time?

Sarah, well done but speak to Jason as you might need his protection.

What, the film was not about Jason Bourne? Why was Matt Damon’s voice-over there!!!

See the film, on a flight or wherever. You should, Andrew and Dave and perhaps Nick and Hamish.

Jason, protect me too!!!

Unfortunately, they did get her!


NHS: Changes Or A Conspiracy Against The Public Interest


KPMG and PwC Reykjavik offices are raided by Icelandic police


Shadow Elite: The "Inside Job" That Toppled Iceland's Economy

Email: cockroachcatcher (at) gmail (dot) com.
Posted by Am Ang Zhang at 11:03 PM