As I listen to the performance of La Traviata at The Met of December 15 2018 which is the same one with the same cast we went to on December 22, 2018, I will reprint an earlier blog.

In The Cockroach Catcher:


“It would not be a great surprise to anyone who has any inkling of the history of medicine that sooner or later any medical condition with an alleged aetiology of pure psychological origin will prove to have a non psychological cause. This is particularly true of those conditions classified by non-psychiatrists.

In the past, ignorance has led to belief that certain conditions are either punishment by god, visions of great religious significance or simply madness. Accordingly you might be burnt, become a saint or simply be given one of the psychiatric medications.”

Tuberculosis is one such condition that came to mind, more so as last Sunday we saw a production of La Traviata by one of opera’s grandest composers, Giuseppe Verdi.

In 1897, a young nun Thérèse Martin in a convent of Lisieux was dying of tuberculosis. She was essentially writing the equivalent of the modern day blog in the form of a diary. She was 24 then and had led an uneventful and sheltered life, taking the veil at only 15 and in contrast to most saints, she experienced and accomplished little. With her tuberculosis, her health deteriorated rapidly and she spent her last five years in the convent’s infirmary, continuing to diarise her innermost thoughts and emotions up until her death. The convent published her writings as an autobiography: Story of a Soul. After her death, many miracles were attributed to her intervention. In 1925, she became Saint Thérèse of the Child Jesus and of the Holy Face, and during World War II, Pope Pius XII proclaimed her co-patron saint of France, along with Joan of Arc.

Yet not long before the Industrial Revolution, in folklore, tuberculosis had been regarded as vampirism. As people with TB often had red, swollen eyes, pale skin and coughing blood, stories abounded that the afflicted could only replenish this loss of blood by sucking blood.

All of this changed in the nineteenth century – Mimi in La Bohème, Violetta in La Traviata (from Murger’s Scènes de la vie de Bohème, and Alexander Dumas’ novel La dame aux Camélias) and of course Hugo’s Fantine in Les Misérables. Tuberculosis became the preferred cause of death for a certain type of female character.

Verdi at 38 began an affair with a singer who was later to become his wife. Many viewed La Traviata as Verdi’s own way of testing public opinion. His new wife was luckier than Violetta.

Verdi of course was an opera revolutionary and in a letter to his friend Cesarino de Sanctis early in 1853, he wrote, “For Venice I am writing La Dame aux Camélias, a contemporary subject. Another composer might not want to do it perhaps because of the costumes, the period, and a thousand other awkward scruples … But I am doing it with total pleasure. Everybody screamed in horror when I suggested putting a hunchback on the stage. Well, I was happy to compose Rigoletto.”

He was not so lucky with Venice as they insisted on 1700 costume when Verdi wanted contemporary ones. In that production, Violetta was nowhere near consumptive although it might well be a reflection of sopranos of the time: big and fat.

Luckily for us, his threat to withdraw the opera completely was rescued by a second performance that fitted in with Verdi’s ideal and the opera world was blessed with one of the three most performed operas; La Boheme and Rigoletto being the other two. All three operas remain my favourites.

Carlos Kleiber’s Traviata starring Ileana Cotrubas and Placido Domingo has to be the all time best in my eyes (or more correctly to my ears), closely followed by Angela Gheorghiu’s amazing performance under Sir Georg Solti. 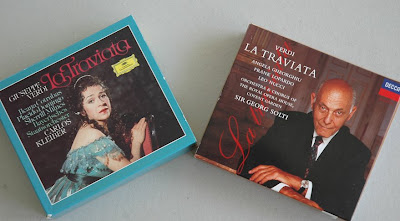 In 1993 we went to Boheme at the Met. A very beautiful and slim Mimi appeared and you could hear the silence in the audience as she started to sing. It was one of the best Boheme’s: Angela Gheorghiu’s debut at the Met.

Tuberculosis sells.
Opera in the end is still one of the best medium as Dumas is hardly known nor performed nowadays.

Email ThisBlogThis!Share to TwitterShare to FacebookShare to Pinterest
Labels: opera