Mysterious Psychosis: One Patient One Disease

I have often wondered if the government is right after all: most of the time we do not need doctors.

What is the point of spending years studying about some fairly rare conditions and then when the time comes we still miss it. This was covered in the recent uproar about the boy with Addison’s disease by Dr Crippen and Jobbing Doctor. Then we have the X-Factor boy with a 2 Kilogram tumour that remained undiagnosed till late, the inquest hearing continues so I cannot comment any further.

I remembered graduating from medical school quite worried about treating patients as we seemed to know all the rare conditions but little about coughs and colds.

We all know about Hodgkin, Von Recklinghausen and Rett.

Have they done such a good job dumbing down the new generation of doctors or were they too busy with Hemlock to have time for much else?

Even in the US were they too busy working for the big drug firms to have time to teach them real medicine?! Has everything got to be ADHD, Bipolar or psychosis. Especially ADHD for a 39 year old?!

“She was 39. Divorced. Lived alone. She took two medications for high blood pressure, as well as an antidepressant and a stimulant, Concerta, a long-acting form of Ritalin, for a diagnosis of attention-deficit disorder.”

“Psychosis and mania were rare but documented side effects of Concerta. Was that the cause of her symptoms or was this simply a manic episode in an underlying bipolar disorder?”

The consultant stopped the stimulant and tried to start the patient on antipsychotic and mood-stabilizing medications.

“She refused to take them, so he gave the medication by injection. Slowly her behavior began to change. The wild swings of emotion and outbursts of anger became less frequent. But strangely, her disordered thinking and paranoid delusions persisted. Usually these symptoms improved and worsened together.”

The psychiatrist was called because the nurse could not get her blood pressure.
No, she was not in shock. It was so high it went off the scale.

The Internist was called and she got a high reading of 240/110 and the patient was put into ICU.

I hope by now you have guessed what the diagnosis was.

PHEOCHROMOCYTOMA: the one we all know about. Used to!

But why should the patient not have pheochromocytoma and ADHD and paranoid psychosis and a touch of bipolar. She was after all suicidal and she thought the police came after her seven times!

Perhaps the psychiatrist was still brought up on ONE PATIENT ONE DISEASE.

“The psychiatrist had taken her off Concerta, the stimulant, because he knew that it sometimes causes psychosis and mania. That drug works, in part, by causing an overproduction of adrenaline.

“If the drug could sometimes cause psychosis and mania, could this adrenaline-producing tumor do the same thing? He found several papers describing patients who, like this woman, had pheochromocytomas as well as mania and psychosis. The symptoms resolved once the tumor was removed. It was unusual, but it had been reported.”

“And finally, after a year and a half, she was medication free and remains so to this day, three years after her surgery.”

Pheochromocytoma: One Patient One Disease. 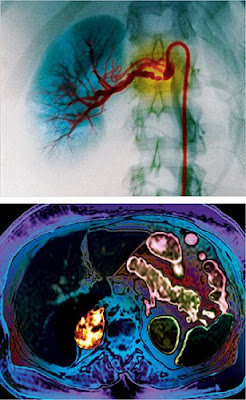 Narrowing of the renal artery.