Back to Alaska again and this time it is not about Zyprexa.


One of my earliest geography teachers was so inspiring that even those of us who did not become geologists remain interested in the subject. Plate tectonic theory was still being debated then and we have come a long way in understanding earthquakes and volcanic eruptions. Such activities of our planet we were told then were due to the Earth's general cooling. It could not explain why there are more serious ones in some years than in others. Geologists are still not good at predicting when they might occur as the Sichuan one of 2008 was a complete surprise. . They have for weeks now suspected that the one in Alaska just might erupt.
Associated Press: 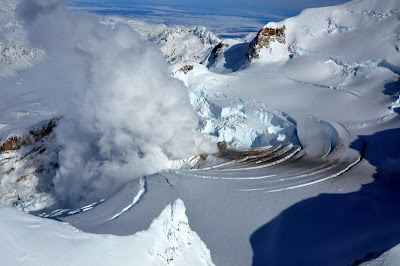 "Alaska's Mount Redoubt volcano erupted four times overnight, sending an ash plume more than 9 miles high into the air, but the state's largest city has likely been spared from any ashfall.
"The ash cloud went to 50,000 feet, and it's currently drifting toward the north, northeast," said Janet Schaefer, a geologist with the Alaska Volcano Observatory.
The first eruption, in a sparsely area across Cook Inlet from the Kenai Peninsula, occurred at 10:38 p.m. Sunday and the fourth happened at 1:39 a.m. Monday, according to the observatory.
"The wind patterns were taking the ash cloud away from Anchorage, toward Willow and Talkneetna, 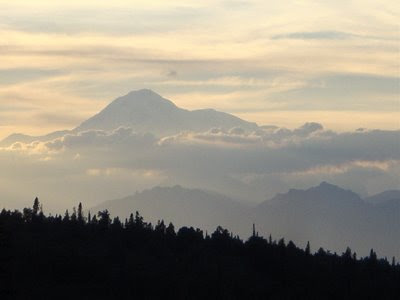 
near Mount McKinley, North America's largest mountain in Denali National Park.
The 10,200-foot Redoubt Volcano, roughly 100 miles southwest of Anchorage, last erupted during a four-month period from 1989-90.
But the volcano became restless earlier this year. The observatory had warned in late January that an eruption could occur at any time.
Increased earthquake activity over the past 48 hours prompted scientists to raise the alert level for Mount Redoubt on Sunday.
On Sunday morning, 40 to 50 earthquakes were being recorded every hour.
A steam plume rising about 1,000 feet above the mountain peak was observed Saturday."

Alaska volcanoes typically explode and shoot ash upward, sometimes to 50,000 feet, high into the jet stream. The Redoubt eruption on Dec. 15, 1989, sent ash 150 miles away into the path of a KLM jet, stopping its engines. The jet dropped more than two miles before the crew was able to restart engines and land safely at Anchorage.

Was that not the year of the San Francisco Quake that caused a great deal of urban damage? It was October 17th 1989 indeed.

What is not so well known is the Old Faithful Geyser at Yellowstone changed its pattern of eruption.

It also happened before the Denali quake of 2002. 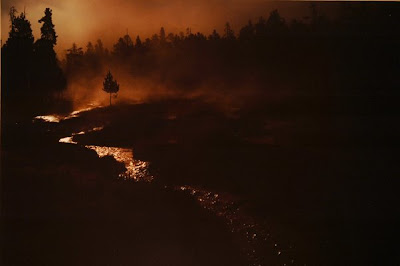 “Hundreds of earthquakes have hit Yellowstone National Park, raising fears of a more powerful volcanic eruption.
“The earthquake swarm, the biggest in more than 20 years, is being closely monitored by scientists and emergency authorities.
“The series of small quakes included three last Friday which measured stronger than magnitude 3.0. The strongest since this latest swarm of quakes began on December 27 was 3.9.
“No damage has yet been reported but scientists say this level of activity - there have been more than 500 tremors in the last week - is highly unusual.”
Perhaps San Francisco should get ready for the big one again! 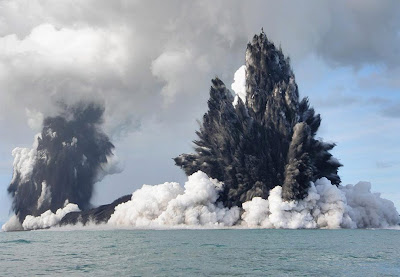 An undersea volcano erupts off the coast of Tonga (Dana Stephenson/Getty Images)
Tonga volcano spews spectacular plume into South Pacific sky
You can read about it at Scientific America.

"An undersea volcano in the South Pacific is spewing stunning columns of smoke, steam and ash thousands of feet into the air.

"The eruption began Monday after a series of earthquakes near Tonga, a 170-island archipelago between Australia and Tahiti, residents told the Associated Press. There were magnitude-5.0 quakes there Sunday night and Monday afternoon, according to the U.S. Geological Survey. Though the Wellington Volcanic Ash Advisory Center (VAAC) issued an advisory for the area, the plume isn’t endangering* island residents and so far hasn’t hurt fish or other animals, according to the AP.Yesterday a plume rose to between 15,000 and 25,000 feet (4.6 to 7.6 kilometers), the Smithsonian's Global Volcanism Program reported. 'It's a very significant eruption, on quite a large scale,' Tonga's chief geologist, Kelepi Maf, told the Times of London. This is not unusual for this area and we expect this to happen here at any time.

"Tonga is part of the ring of fire, an arc of earthquake and volcanic zones in the Pacific."

Recent devastating earthquakes:
The Great Sumatra-Andaman earthquake on Boxing Day of 2004 caused the worst tsunami in most people’s living memory.

The Sichuan Earthquake of May 12, 2008 was the worst in China’s recent history.

Even in the UK there was an earthquake in 2008. And also in Costa Rica andPakistan.